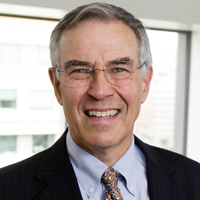 CEO of the American Association for the Advancement of Science (AAAS)

Rush D. Holt, is the CEO of the American Association for the Advancement of Science (AAAS) and executive publisher of the Science family of journals. Before coming to AAAS, Holt served for 16 years as a member of the U.S. House of Representatives, representing New Jersey’s 12th Congressional District. In Congress, Holt served as a senior member of the Committee on Natural Resources and the Committee on Education and the Workforce. Holt served eight years on the Permanent Select Committee on Intelligence and, from 2007 to 2010, chaired the Select Intelligence Oversight Panel, which worked to strengthen legislative oversight of the intelligence community. His legislative work earned him numerous accolades, including being named one of Scientific American magazine’s “50 National Visionaries Contributing to a Brighter Technological Future” and a “Champion of Science.” From 1987 to 1998, Holt was assistant director of the Princeton Plasma Physics Laboratory (PPPL), a Department of Energy national lab, which is the largest research facility of Princeton University and one of the largest alternative energy research facilities in the country.