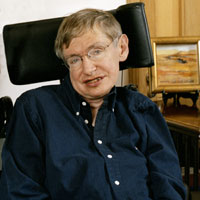 Stephen W. Hawking is one of the world’s foremost theoretical physicists. His dramatic breakthroughs into the origin of the universe and the properties of black holes are among the most revolutionary insights into the nature of the cosmos since the work of Albert Einstein. Over a 40-year academic career, he has made groundbreaking contributions to the fields of cosmology and quantum gravity. With Roger Penrose, he showed that Einstein’s General Theory of Relativity implied space and time would have begun at the Big Bang and ended in black holes, suggesting it was necessary to unify General Relativity with Quantum Theory. In 1974, this led him to the astonishing discovery that black holes should emit radiation, today known as Hawking radiation.

Dr. Hawking’s extraordinary ability to communicate complex theories in an accessible way has opened the mysteries of distant worlds to the broader public. His popular books include the 1988 A Brief History of Time, which has sold more than ten million copies. With his daughter, Lucy Hawking, he has authored two children’s books: George’s Secret Key to the Universe and George’s Cosmic Treasure Hunt. Among his many honors are a 2009 Presidential Medal of Freedom.