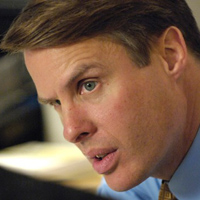 Terry Moran is a co-anchor of ABC News’ Nightline and covers the Supreme Court for the network from his base in Washington, DC. At Nightline Moran has led the program’s distinguished coverage of many of the major news stories over the past several years. Moran extensively covered the 2012 election for Nightline where he reported on the Republican and Democratic National Conventions, the Presidential and Vice Presidential debates, election night and the 2013 Inauguration. Additionally, in 2012, he reported for Nightline and all ABC News programs on the Supreme Court’s historic ruling to uphold the Affordable Care Act.

In March of 2009, Moran underwent DNA testing to discover whether he carried genetic markers associated with Alzheimer’s disease, which runs in his family. The resulting story was an emotional account of the toll the disease takes in America and a powerful call to action. Moran has written for several publications, including The New York Times, The Washington Post, and The New Republic Magazine—where he began his career in journalism.