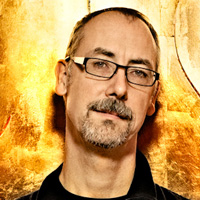 Tim McHenry, the program producer at New York City’s Rubin Museum of Art, presents theater-going audiences with what the Huffington Post has called “some of the most original and inspired programs on the arts and consciousness in New York City.” His public programs explore the wider implications of the museum’s collection and art exhibitions through music, film, performance, and intimate conversation. To mark the exhibition and publication of psychiatrist C.G. Jung’s Red Book, for example, McHenry put Jungian psychoanalysts on stage with the likes of Alice Walker, Sarah Silverman and David Byrne. He brought physicists together with Philip Glass, Charlie Kaufman, Laurie Anderson and filmmaker Shekhar Kapur to explore the universe in connection with an exhibition on the cosmos in 2010. He has invited great minds such as Oliver Sacks, Mike Nichols and Ken Burns to come to the museum to “talk about nothing.”

The museum’s popular series of Brainwave talks, which McHenry just produced for the fifth year in a row, has paired renowned neuroscientists such as Eric Kandel and Daniel Kahneman with the likes of Tom Wolfe, Lou Reed, Moby, Amy Tan and Paul Simon. McHenry has also organized art experiences that break the traditional mold, such as the Dream-Over—a sleepover at the museum for grown-ups—and an event that converted the whole building into an olfactory Memory Palace.