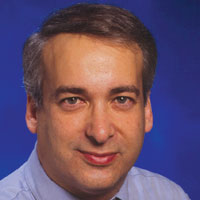 A 1978 Harvard graduate, Todd Sacktor completed his M.D. at the Albert Einstein College of Medicine and his neurology residency at Columbia University, where he began studying the role of the enzyme protein kinase C (PKC) in the short-term memory of Aplysia (marine snails).

In 1990, Sacktor established his own laboratory at the SUNY Downstate Medical Center, where he discovered a brain-specific form of PKC called PKMzeta. In 2002, his lab demonstrated that PKMzeta was both necessary and sufficient for maintaining long-term potentiation—the leading candidate mechanism for memory in the brain. Five years ago, Sacktor and his colleagues uncovered PKMzeta’s impact in maintaining the brain’s long-term memory trace. As recently as 2011, research has shown that decreasing PKMzeta activity disrupts previously stored long-term memories and increasing PKMzeta activity enhances them.

In 2006, the editors of Science highlighted Sacktor’s work on PKMzeta and memory as one of the top ten “Breakthroughs of the Year.” In 2009, his contributions were featured on the front page of The New York Times. He is currently Distinguished Professor of Physiology, Pharmacology, and Neurology at SUNY Downstate.