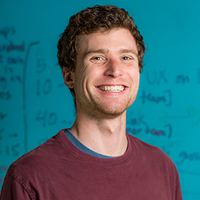 Tom McFadden is a middle school science teacher by day at The Nueva School in Hillsborough, CA, and a science rapper by night. His YouTube channel, “Science With Tom,” features rap battles between Rosalind Franklin and Watson & Crick, lyrical odes to cellular respiration, and dozens of professional-grade student-produced music videos about biology. He first combined his passion for music, video, science, and education while working as a teacher’s assistant in biology classes at Stanford University. He then received a Masters of Science Communication to study the impact of music in the science classroom thanks to a Fulbright Scholarship. McFadden is in his fourth year teaching middle school, and just launched “Science With Tom” as its own entity (with grants from New Schools Venture Fund & 4.0 Schools) in order to spread his unique educational style to students and teachers around the country.