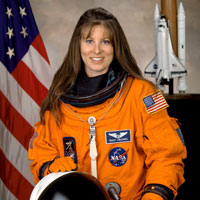 Since joining NASA in 1998, Tracy Caldwell Dyson has logged more than 300 hours in space. During her first trip aboard the space shuttle Endeavour in 2007 she served as the intra-vehicular (spacewalk coordinator and primary shuttle robotic arm operator). On April 2, 2010, in a Russian rocket with two Cosmonauts, she lifted off from a space center in southern Kazakhstan for a 6-month stay on the International Space Station. In a space walk set for July, she will help install a power data grapple fixture that will enable attachment of a robotic arm. Dr. Caldwell Dyson participated in the testing and integration of Russian hardware and software products developed for the space station. In addition, she has worked inside Mission Control as spacecraft communicator (CAPCOM) for both Space Shuttle and space station operations.

When not in space, Dr. Caldwell Dyson is a lead vocalist in the Houston-based all-astronaut rock band Max-Q.