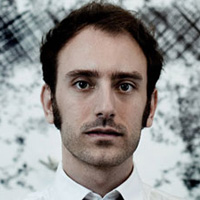 Tristan Perich’s work is inspired by the aesthetic simplicity of math, physics and code. WIRE magazine describes his compositions as “an austere meeting of electronic and organic.” 1-Bit Music, his 2004 release, was the first album ever released as a microchip, programmed to synthesize his electronic composition live. His latest circuit album, 1-Bit Symphony (Cantaloupe, 2010) has received critical acclaim, called “sublime” (New York Press), and The Wall Street Journal said “its oscillations have an intense, hypnotic force and a surprising emotional depth.” His award-winning work coupling 1-bit electronics with traditional forms in both music (Active Field, Observations) and visual art (Machine Drawings, Microtonal Wall) has been presented around the world, from Sonar and Ars Electronica to the Whitney Museum and bitforms gallery.