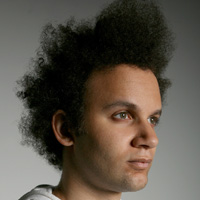 For the past sixteen years, American composer Tyondai Braxton has been actively involved in music composition and performance. Bridging the purview of his interests in solo composition, experimental sound, pop music and large-scale orchestra, his music has received critical acclaim from an extraordinarily diverse expanse of the music world. In 2009, Warp Records released Central Market, a large-scale orchestral score with performances by Wordless Music Orchestra, which, while eyeing the direction of Braxton’s work to come, spiritedly totalizes the artist’s long-standing pursuit of his own, individual modern composition. Central Market saw it’s US premiere with performances by the Wordless Music Orchestra at Lincoln Center in New York, the Library of Congress in DC, as well as at The Walker Arts Museum in Minneapolis. Said The New York Times of Central Market’s Lincoln Center premiere: “Simply – actually, quite intricately – a blast.” New York Magazine called the performance “Relentlessly exciting, elaborately layered, with the manic intensity of a movie foot chase.” Braxton co-founded the avant-rock group Battles, in which, until 2010, he performed as guitarist, keyboardist, and singer. The group received worldwide acclaim for their debut album Mirrored (2007). Since his departure from Battles, Braxton has focused on the live presentation of Central Market as well as a series of prestigious commissions, ranging from multimedia art/music installations (Lower Manhattan Cultural Council) to compositions for world-renowned ensembles (the Kronos Quartet, Bang On A Can) and contemporary dance (choreographer Alan Good). The music has also been adapted for ballet by Baryshnikov Art Center resident choreographer John Heginbotham.