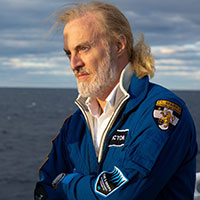 Victor Vescovo is the first person to dive “The Five Deeps” – the deepest point in all five of the world’s oceans. He is the first person to dive the Mariana Trench repeatedly: 15 times to date. Victor has also made three dives to the Titanic including the only solo dive ever made there, and completed the two deepest wreck dives in history at the sites of the USS Johnston in 2021 and the USS Samuel B. Roberts in 2022. In June of 2022 he also ventured into space on Blue Origin’s New Shepard-21 mission, making him the first person in history to climb Mt. Everest, dive to the bottom of the ocean, and go into space. He received his MBA from Harvard Business School and a Master’s Degree from the Massachusetts Institute of Technology, and served 20 years in the U.S. Navy Reserve as an intelligence officer, retiring in 2013 as a Commander. His company, Caladan Oceanic, is committed to using technology and exploration to learn more about the oceans, and Victor usually pilots the submersible on Caladan’s dives.