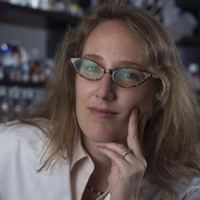 Virginia W. Cornish graduated summa cum laude from Columbia University with a B.A. in Biochemistry in 1991, where she did undergraduate research with Professor Ronald Breslow. She earned her Ph.D. in Chemistry with Professor Peter Schultz at the University of California at Berkeley and then was a Postdoctoral Fellow in the Biology Department at M.I.T. under the guidance of Professor Robert Sauer. Cornish joined the faculty of the Chemistry Department at Columbia in 1999, where she carries out research at the interface of chemistry and biology, and was promoted to Associate Professor with tenure in 2004 and then Professor in 2007. Her laboratory brings together modern methods in synthetic chemistry and DNA technology to expand the synthetic capabilities of living cells. Her research has resulted in 59 research publications and several patents and currently is supported by multiple grants from the NIH and NSF. Cornish has been recognized for her research by awards including an NSF Career Award (2000), a Sloan Foundation Fellowship (2003), the Protein Society Irving Sigal Young Investigator Award (2009), and the American Chemical Society Pfizer Award in Enzyme Chemistry (2009).