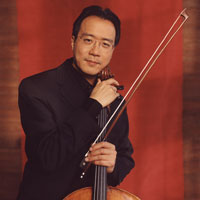 The many-faceted career of cellist Yo-Yo Ma is testament to his continual search for new ways to communicate with audiences, and to his personal desire for artistic growth and renewal. In 1998 Mr. Ma established the Silk Road Project to promote the study of the cultural, artistic and intellectual traditions along the ancient Silk Road trade route that stretched from the Mediterranean Sea to the Pacific Ocean. By examining the flow of ideas throughout this vast area, the Project seeks to illuminate the heritages of the Silk Road countries and identify the voices that represent these traditions today. The Project’s major activities have included the 2002 Smithsonian Folklife Festival, which included more that 400 artists from 25 countries and drew more than 1.3 million visitors, concerts at the 2005 World Expo in Aichi, Japan, and Silk Road Chicago, a city-wide year-long residency in partnership with the Art Institute of Chicago, the Chicago Symphony Orchestra and the City of Chicago. Mr. Ma and the Silk Road Ensemble performed at the Opening Ceremony of the 2007 Special Olympics in Shanghai.

Mr. Ma is an exclusive Sony Classical artist, and his discography of over 75 albums (including more than 15 Grammy Award winners) reflects his wide-ranging interests. All of his recent albums have quickly entered the Billboard chart of classical best sellers, remaining in the Top 15 for extended periods, often with as many as four titles simultaneously on the list.

Yo-Yo Ma was born in 1955 to Chinese parents living in Paris. He began to study the cello with his father at age four and soon came with his family to New York, where he spent most of his formative years. Later, his principal teacher was Leonard Rose at the Juilliard School. He sought out a traditional liberal arts education to expand upon his conservatory training, graduating from Harvard University in 1976. He has received numerous awards, including the Avery Fisher Prize (1978), the Glenn Gould Prize (1999), the National Medal of the Arts (2001), the Dan David Prize (2006), the Sonning Prize (2006) and the World Economic Forum’s Crystal Award (2008). In 2006, then Secretary General Kofi Annan named him a United Nations Messenger of Peace. In 2007, Secretary General Ban Ki-moon extended his appointment. In January 2009, at the invitation of President-Elect Barak Obama, Mr. Ma played in the quartet performance of John Williams’ Air and Simple Gifts at the 56th Inaugural Ceremony.

Mr. Ma and his wife have two children. Mr. Ma plays two instruments, a 1733 Montagnana cello from Venice and the 1712 Davidoff Stradivarius.