The Next Big Thing In Telescopes

Galileo Galilei was not the originator of the telescope, but in 1609 he did provide a crucial design advance by fitting concave and convex lenses at the opposite ends of a tube. Subsequent improvements followed, bumping up the magnifying power of the telescope, and by 1610 Galileo was able to pick out sunspots, the craggy face of the moon, and the satellites of Jupiter.

Now, 405 years after Galileo presented his first improvement on the “perspective glass” to the Venetian Senate, scientists are in the midst of making the next big step in telescope history: the Giant Magellan Telescope, which will create images 10 times sharper than the Hubble Space Telescope when it goes online in 2021.

If Galileo were brought before the GMT, “I think it would take him probably about 30 seconds to work out what it is,” says Patrick McCarthy an astrophysicist and the GMT’s project director. “And then he’d ask when he’d get to use it.”

The GMT’s advanced features aren’t just a matter of size: The world of telescopes has made significant advances since Galileo’s day. For starters, Galileo’s device was a refracting telescope, which bends light through its lenses. A simple Galilean telescope uses two lenses, the first of which is a convex objective lens, located at the end of the telescope furthest from your eye. The objective lens collects and bends light, causing the rays to converge at a focal point. The concave eyepiece lens, closer to your eye, magnifies that focused bundle of light so you can see the image.

After Galileo, lens-based refracting telescopes got ever more powerful, mostly by growing longer and longer—Saturn’s moon Titan was discovered in 1655 using a 12-foot-long telescope. But there’s a certain upper limit to the usefulness of lenses, McCarthy says. The larger and larger you build the telescope, the thicker the lens gets, which presents some problems. Larger lenses are harder to support, and with thicker lenses it becomes more likely that impurities in the glass will let less light through. Plus, there is a problem called chromatic aberration: Because different colors of light get bent ever so slightly differently through the lens, a refracting telescope can create rainbow effects around images that become even more noticeable the larger your lenses get.

With this limitation on Galileo’s refracting telescope, GMT’s designers, like those of most modern telescopes, have turned to another model: reflecting telescopes. Reflecting telescopes use curved mirrors in place of lenses. Mirrors don’t create the optical aberrations that can arise with lenses, but were not as easy to sculpt until the advent of modern manufacturing techniques. “Our project is about building on the latest technology in mirrors,” McCarthy says. The GMT uses “the largest mirrors ever made, and the most optically challenging.” 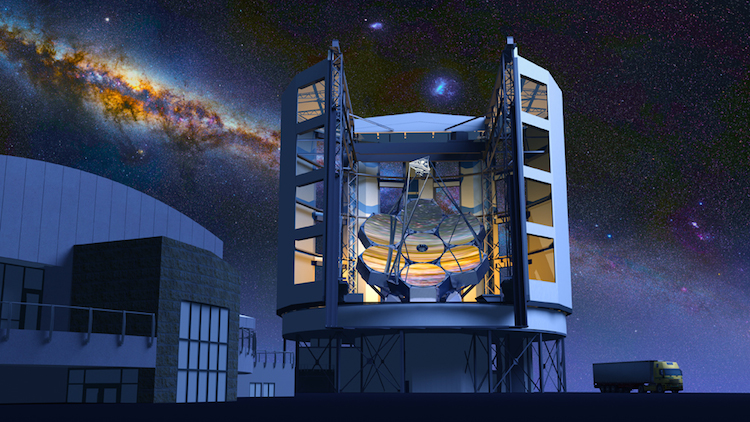 McCarthy’s colleagues have already created one of the GMT’s seven mirrors, and four more are in production right now. Thankfully, he says, they’ve started with the most challenging surfaces. “When you grind a curve into a mirror, the simplest thing is to grind it into a spherical shape; when you polish something it wants to be a sphere,” McCarthy explains. But six of the GMT’s mirrors have shapes more comparable to Pringles potato chips, he says. Plus, the curvature of the mirror has to be incredibly accurate. The mirror is 80 feet long, and the difference between the highest point and the lowest point of its surface is just around 15 millimeters; that height has to be ground down with an accuracy equal to one-twentieth of the wavelength of light.

“We have to polish this thing to within a millionth of an inch,” McCarthy says.

By creating sharper images than ever before, the GMT will hopefully allow scientists to see greater details in the night sky, perhaps enabling researchers to observe planets around other stars, instead of watching them indirectly as they pass across their home suns as is typically done today. The GMT’s location in the Andes mountains is situated such that the center of the Milky Way will pass right overhead; the telescope may offer a better glimpse of our galaxy’s heart. And McCarthy hopes to use the GMT to peer back through time as well as space, to gather light from near the birth of the universe.