Will The Higgs Boson Destroy The Universe In A Cosmic Death Bubble? 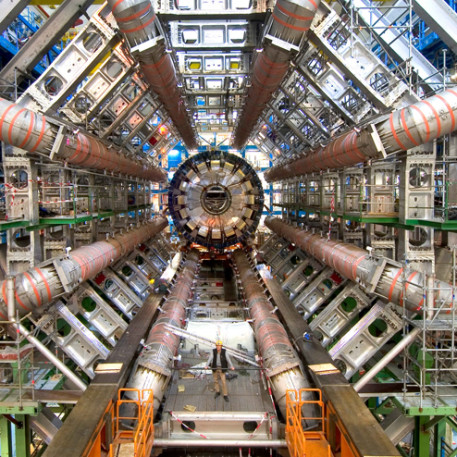 Some context: over the weekend, several press outlets took a chunk of Stephen Hawking’s latest book and ran a bit off the deep end with it, reporting that the “God Particle” was going to wipe out the universe. Here’s what Hawking wrote in the preface to the upcoming book Starmus:

“The Higgs potential has the worrisome feature that it might become metastable at energies above 100bn gigaelectronvolts (GeV). This could mean that the universe could undergo catastrophic vacuum decay, with a bubble of the true vacuum expanding at the speed of light. This could happen at any time and we wouldn’t see it coming.”

How does this all relate to the end of the universe? Before the Higgs boson was discovered, scientists wondered if we live in a stable universe, an unstable one, or one that’s metastable—stable for an extended time period, but not at the absolutely most stable point it could be at. Now that the Higgs boson has been discovered and the first measurements of its mass made, scientists think that we’re probably living in a metastable state. Basically, our universe seems to be comfortably tucked in a valley of energy states, but it’s still not the lowest ground around. If something pushes us up and over the side of our valley (or tunnels through the valley wall), we could fall into new and lower territory.

The process of transitioning to a lower energy state is sometimes called “vacuum decay.” If it occurred at any point in the universe, the bubble of this new vacuum state would expand outward at the speed of light. We wouldn’t have any warning until we were obliterated very suddenly. But getting to this new state requires an intense amount of energy—which is one of the reasons why Katie Mack, a theoretical astrophysicist at the University of Melbourne, thinks it’s extremely unlikely that we’ll be swallowed up by a cosmic death bubble any time soon.

If the universe was going to fall to that lower energy state, “it would have done that in the very early universe, which was a very energetic time; the energy from inflation would have kicked us into the other vacuum in the tiniest fraction of a second,” Mack says.

The gargantuan energy levels thought to be necessary for this transition can also occur in cosmic ray collisions, Mack says, but building a particle collider that packs that kind of power is well beyond human capabilities at this time (Hawking himself notes in Starmus that such a collider would have to be larger than Earth). So discovering the Higgs boson or turning on the Large Hadron Collider makes it no more likely that vacuum decay will occur.

Even so, our metastable universe does have the potential to drop further down. But most physicists think that this decay won’t happen for eons, if it happens at all. Further experiments and new calculations could also reveal that the universe is more stable than previously thought.

“Everything Hawking says is true; the Higgs potential is what governs what vacuum state we’re in, and we can transition,” Mack says. “But it’s really unlikely that would happen. Meanwhile, I’ve been trying to defend the poor little Higgs boson—it’s not out to hurt us.”