The Sugary Secrets Of Candy-Making Chemistry

There’s a real art to making candy—and a lot of science, too. Even the simplest sugary treat is shaped by complex chemistry. Here’s some of the inventive science that goes on behind the scenes of making some of your favorite sweet treats: 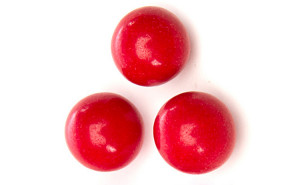 Atomic Fireballs take cinnamon flavors over the edge into mouth-searing spiciness. To add some heat to their sweets, the makers of Atomic Fireballs, the Ferrara Candy Company, add a bit of a chemical called capsaicin, a little molecule that also gives hot peppers their kick. (Ferrara claims that the amount of capsaicin in Atomic Fireballs is equivalent to about 3,500 Scoville Heat Units, or the same spiciness as a jalapeno pepper.)

So what makes capsaicin so spicy? When the chemical binds to your taste receptors, it opens up channels in cell membranes that allow calcium ions to rush in—which, from your cells’ point of view, is the exact same thing that happens when they’re exposed to uncomfortable amounts of heat. Water won’t neutralize the burn, because capsaicin is insoluble in it. Milk, on the other hand, works to take away the pain because it contains casein, a fat-loving molecule that can glom onto capsaicin’s fatty tail, making it easier for the spicy molecules to be washed away. 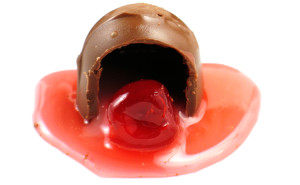 Chocolate Cherries Get A Liquid Center From Enzymes

There are lots of different ways of making chocolate-covered cherries, also known as cherry cordials. Some are just whole cherries coated in chocolate, while other cordials are made by placing cherries and cherry syrup in a chocolate mold that’s plugged up with even more chocolate. But there’s another way of making cherry cordials that gets a little more involved in chemistry.

These cherry cordials are made by coating a cherry with a sugary paste containing the enzyme invertase, which breaks down sugar, and then rolling that paste-covered cherry in chocolate. Once the cordials are made, they’re stored for a couple weeks to allow the enzyme to do its work. Some of the sucrose in the cherries is broken down into the more water-soluble dextrose and fructose. “In effect, the outer part of the cherry liquefies in its own syrup, leaving the cherry center swimming in liquid,” David Chisdes, a candy chemist, told the Los Angeles Times. “This explains how these succulent candies can be made without there being a hole somewhere in the coating.” 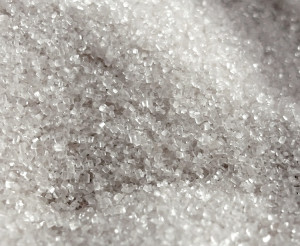 The Many Transformations Of Sugar Syrup

A lot of different types of candy can be made from a simple mixture of sugar and water. The key is in how hot you heat the mixture. Heated sugar solution passes through several candy stages, corresponding to the concentration of sugar in the mixture:

Thread Stage—occurs when the mixture is heated to between 230 degrees Fahrenheit and 235 degrees F, and corresponds to a sugar concentration of 80 percent. When placed in water, this syrup forms a little liquid thread. This syrup is good for pouring over ice cream, glazing fruits, or sweetening tea.

Soft-ball Stage—occurs at between 235 and 240 degrees F and corresponds to a sugar concentration of 85 percent. When dropped in water, the mixture forms a soft ball. This stage is good for making fondants and fudge.

Firm-ball Stage—occurs at between 245 and 250 degrees F, with a sugar concentration of 87 percent. When dropped in water, this stage forms a ball that’s still malleable but which won’t flatten as much as the soft-ball stage. At this point, the mixture is good for making caramels.

Hard-ball Stage—occurs at between 250 and 265 degrees F, with a sugar concentration of 92 percent. When dropped in water, this stage forms a hard ball that’s still a little bit yielding if you really squish it. Marshmallows, gummies and rock candy are made from this stage.

Soft-Crack Stage—occurs at between 270 and 290 degrees F, with a sugar concentration of 95 percent. When dropped in water, this stage forms threads that are flexible. Saltwater taffy and butterscotch are cooked to this stage.

Hard-Crack Stage—occurs at between 300 and 310 degrees F, with a sugar concentration of 99 percent. When dropped in water, this stage makes hard, brittle threads. Hard-crack stage is used to make lollipops, toffees, and brittles.

Heat your mixture beyond these stages and you will enter the realm of caramelization. The water in the mixture has been boiled off, and now there is a complicated series of reactions happening in the sugar molecules themselves. In the process, volatile chemicals are released that give caramelized sugar its luscious flavor.

The Cool Chemistry Of Rock Candy

Candy chemistry isn’t just dependent on how you heat up your sugar mixture; how you cool it down is important too. Rock candy is made by heating up sugar water to the hard-ball stage, then slowly cooling it for several days in order to allow huge crystals of sugar to form. Part of what allows those big crystals to grow is a fundamental chemistry concept known as Le Chatelier’s principle, which basically says that when conditions are shifted inside a system at equilibrium, the system will respond in an attempt to restore equilibrium. In this case, the decreasing temperature of the sugar solution provokes crystallization. 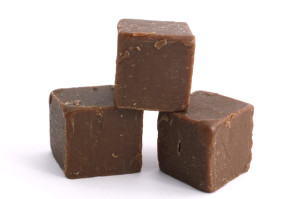 For candies with a smooth texture, like fudge, a confectioner wants to minimize crystallization as the sugar mixture cools. Crystallization needs some “seed” to kickstart the process, a pattern for the dissolved sugar in the cooling mixture to copy, which could be a tiny sugar crystal or even a piece of stray dust. In making fudge, keeping anything that can act as a crystal nucleus out is key.

“This is why most fudge recipes require that the sides of the pot be washed down early in the cooking process, either with a wet pastry brush or by putting the lid on the pan for about three minutes to remove any sugar crystals clinging to the container walls,” University of Alaska Fairbanks physicist Sue Ann Bowling wrote in a piece on fudgy physics.“It is also why the recipes specify that the sides and bottom of the pan should not be scraped into the bowl where the candy is to cool. There is too much chance of scraping in a stray sugar crystal.”

Fudge recipes also counteract crystallization by recommending the use of more than one kind of sugar, like corn syrup as well as table sugar. Having different kinds of sugar in the solution means they interfere with the other’s crystallization process, according to Bowling. Then, when the mixture has cooled enough, the fudge is stirred rapidly to stimulate crystallization all at once, which produces a fudge with lots of tiny crystals as opposed to fewer chunks of larger crystals—creating a taste that’s creamy, not grainy.