When we talk about studying, controlling, or just plain worrying about pandemics, we usually think of our own, human diseases. But many other species face existential threats as well. In the wild and on the farm, through climate change, human agency, and other causes, deadly diseases and conditions are ravaging specific animal communities. Here are eight of the scariest diseases plaguing the animal kingdom today. 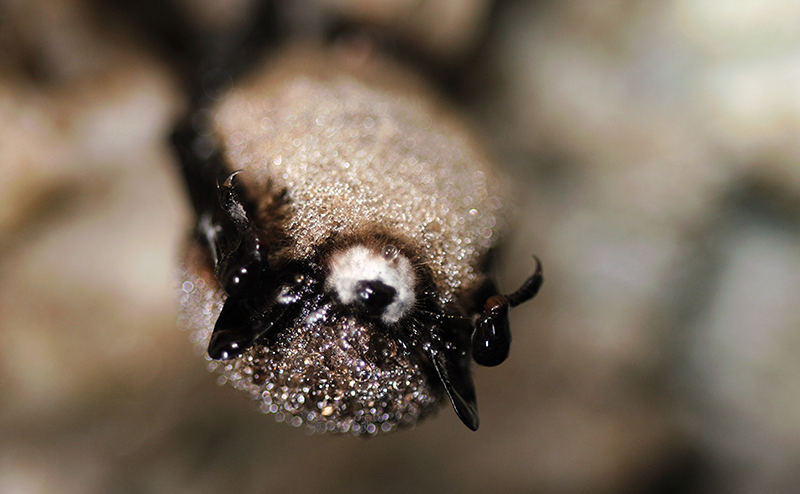 This disease is named for the characteristic fuzzy white bloom found on the muzzles (as well as the wings and ears) of hibernating bats infected with the fungus Pseudogymnoascus destructans. The fungus seems to have originated in Europe, where it does not harm the native bats. Since it was first documented in New York in 2006, white-nose syndrome has killed an estimated 6.7 million bats in 25 U.S. states and 5 Canadian provinces. Scientists believe bats primarily contract the disease from one another, though it’s also possible bats can pick up spores from contaminated cave surfaces. Some human cave explorers may also transport fungal spores in their clothing and equipment. There’s no known cure, and the disease is incredibly deadly, usually killing between 70 and 90 percent of bats in a hibernating group; scientists are still trying to figure out exactly how the fungus kills bats, and why European bats seem to be immune.

The virus that causes canine distemper is related to measles. It spreads through respiration, but quickly attacks the nervous system and gastrointestinal tract. The virus can also jump to big cats and is cropping up in tiger populations across the world. In just five years, one population of tigers in Russia dropped from 38 individuals to 9; traces of CDV found in two dead tigers led scientists to finger the virus as the chief suspect in the population crash.

A recent study highlights how smaller populations of tigers are extremely vulnerable to CDV. Tigers are not abundant enough to act as reservoirs for the virus, so researchers think the key to preventing CDV from spreading amongst them is to target the canine species that are the sources of outbreaks. India is contemplating a massive dog vaccination campaign against the virus; the drive is already underway in villages near tiger reserves. 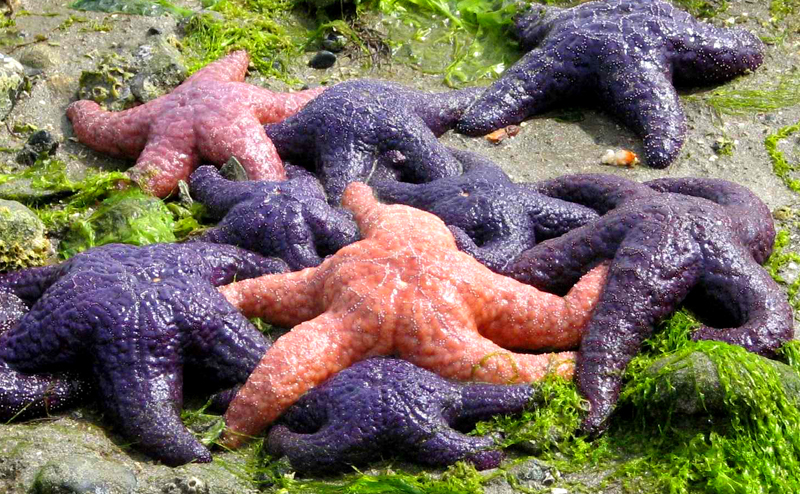 Over the past 40 years, starfish populations have been stricken by recurring outbreaks of a devastating condition. At first, a starfish’s limbs start to curl, then twist and fall off. Eventually, the wasting disease ravages the entire starfish, turning it into a mushy goo.

Researchers previously blamed this “starfish wasting disease” on environmental changes, like pollution or fluctuations in ocean temperatures. But a new study pins the blame primarily on a type of waterborne virus called a densovirus. One of the chief lines of evidence to support this theory was the fact that captive starfish in aquariums suddenly contracted the disease—except for those starfish in aquariums filled with UV-treated water, which kills viruses. The researchers also found higher genetic traces of the virus in diseased starfish tissue, and found that healthy starfish infected with densovirus would develop the disease within a week or so.

The bacterial disease brucellosis causes a wide range of symptoms in animals, from arthritis to inflamed joints to reproductive trouble. It can also spread to people via unpasteurized dairy products, causing fever and flu-like symptoms as well as arthritis. While brucellosis has largely been eradicated from cattle in the U.S., the disease persists in the bison and elk of Yellowstone National Park. Fears that the wild animals could reintroduce brucellosis to nearby cattle have been bolstered by 17 documented transmissions of the disease from wildlife to livestock in the greater Yellowstone area from 2002 to 2012. Despite protests from conservation groups, park officials are planning to cull up to 900 bison from the herd this winter to stem the spread of brucellosis and stabilize the population. 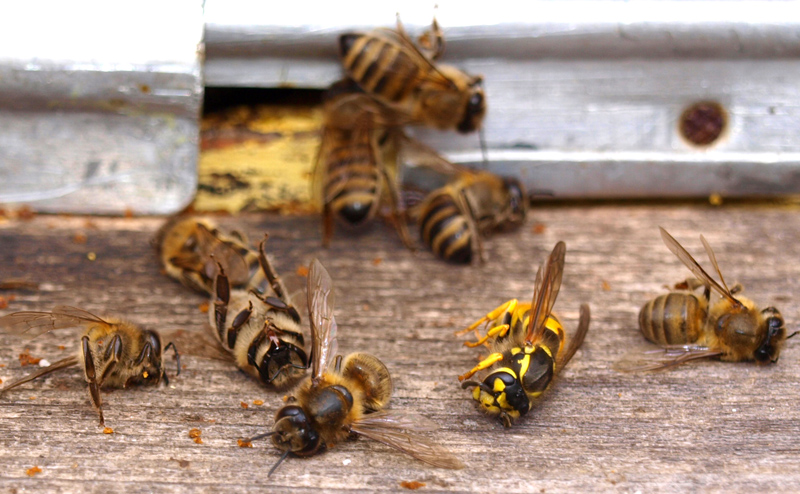 Starting in 2006, beekeepers in the U.S. began to notice what looked like a honeybee version of the Rapture: At once, most or all of the adult worker bees in the colony vanished without a trace, leaving behind empty hives and queen bees bereft of subjects. Colony collapse disorder, as the phenomenon came to be known, is not entirely new to beekeeping, but the magnitude of losses is unprecedented. The root cause of CCD is still unknown: Pesticides, viruses, mites, fungi, antibiotics and other factors have all been proposed.

Most scientists think CCD is prompted by a combination of factors, and that it may not directly kill the bees outright. University of Maryland bee expert Dennis van Engelsdorp explained, in National Geographic: “You don’t die of AIDS; you die of pneumonia or some other condition that hits when your immunity is down. Once the bees’ immune defenses have been weakened, “we’re pretty sure in all these cases, diseases are the tipping point.” Hive losses are still being felt across the country, but the rate of collapse seems to be slowing. According to the USDA, the loss rate in honeybee colonies nationwide over the 2013-2014 winter from all causes was 23.2 percent—still above what beekeepers consider sustainable, but less dire than the 30.5 percent losses of the 2012-13 winter, or the 8-year average annual loss of 29.6 percent.

Rabies is present on all the continents of the world except Antarctica. The virus, transmitted through the saliva of an infected animal or person, travels through the nerves up to the brain, where it undoes an animal’s ability to regulate its own heartbeat, breathing, and salivation. Most victims die from respiratory failure or irregular heart rhythms.

In the U.S., vaccination drives for pets have caused the disease has to move from one primarily of domestic animals to one primarily found in wildlife, which represent 90 percent of all animal rabies cases reported to the CDC. Most mammals can contract rabies, but the primary source of human rabies transmission in the U.S. these days is bats, with raccoons and skunks the most frequently reported rabid animals.

To prevent the spread of rabies, health and wildlife departments in many Eastern U.S. states entice animals to consume oral rabies vaccine by concealing doses in a coating of dog food or fishmeal. The bait is deposited by hand in urban and suburban areas and dropped from planes in rural areas. 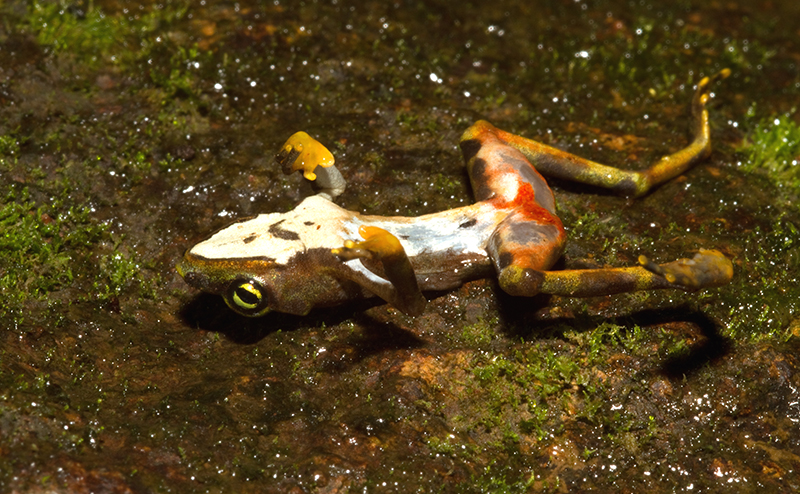 Around 200 amphibian species have declined or gone extinct thanks to this rapidly-spreading fungal disease. The chytrid fungus Batrachochytrium dendrobatidis infects the cells of a frog’s outer layer of skin, which they rely heavily on for respiration. The infected skin becomes thicker, impeding the frog’s ability to absorb water and electrolytes through its skin, and eventually leading to cardiac arrest.

Various treatments are being investigated for chytridiomycosis, including incubating tadpoles in warmer water that kills the fungus and bathing adult frogs in antifungal treatments. While these methods show promise, it is still possible for the frogs to get re-infected out in the wild.

The U.S. government employs a cadre of cowboys to ride the banks of the Rio Grande in order to stop the spread of ticks that cause cattle fever. Parasites transmitted by the ticks can kill a cow within days of the first symptoms, or can cause a wasting disease that can last for weeks and cut a steer’s weight by 20 percent in just a year. A nationwide tick eradication program has largely pushed cattle fever out of U.S. borders, but the “tick rider” cowboys still patrol the borders to catch any stray Mexican cattle—often abandoned by ranchers fleeing drug war violence—that might spark an outbreak.

Wildlife are another possible source of cattle fever, as both white-tailed deer and the imported nilgai antelope can also carry the ticks. Climate change may make the southern U.S. an even more hospitable environment for the ticks, as well as the spread of invasive reeds that shelter the bugs. Scientists are working on ways to combat the reeds, the ticks, and the cattle fever parasite—including a wildlife vaccine distributed in biscuit form.