The first roller coaster at Coney Island, which opened in June 1884, would barely rate in the kiddie section of a modern-day amusement park. The “Switchback Railway” trundled along at just six miles per hour over a series of gentle hills.

Nowadays, roller coasters can put you through loop-de-loops, send you screaming up 38 stories to momentarily rise up free of gravity, and even hang you from a shoulder harness, limbs a-dangle, shooting through corkscrews and switchbacks and cobra turns, with your life in the hands of engineering. Arguably, no other leisure activity makes physics quite so visceral as the roller coaster. Here’s a quick breakdown of the forces that cause your stomach to drop—and keep you in your seat. 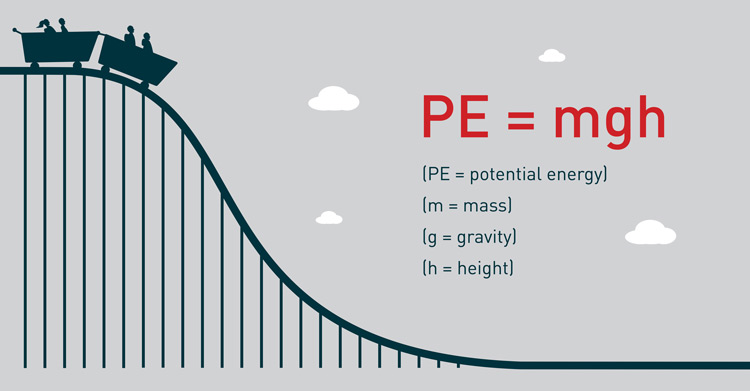 On the oldest roller coasters, the first hill (also known as the “lift hill”) was always the tallest, so as to exploit its potential energy, which is the product of the train’s mass, the standard acceleration of gravity on Earth (9.8 meters per second squared), and the height of the hill. Potential energy is invested in objects based on their position in a system—in this case, in a gravitational field.

When the roller coaster starts flying down the hill, it gains kinetic energy and loses potential energy. At the bottom of the lift hill, the train’s kinetic energy is at the highest point it’ll be on the track, enough to push it through the succession of smaller hills and turns. 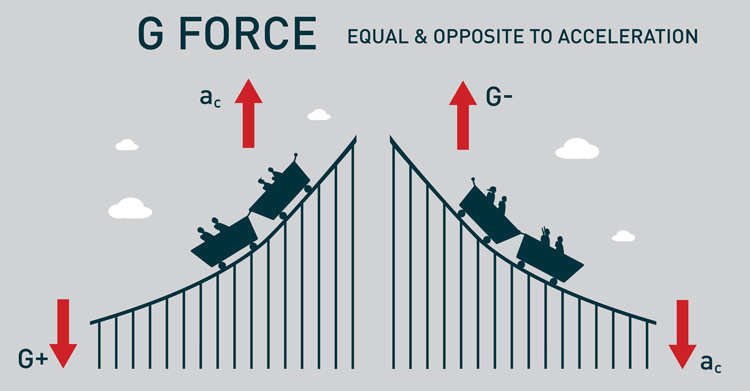 G-force is a term that gets bandied about a lot, but it’s actually not really a proper “force”; it’s a product of acceleration. On Earth, you’re in an environment of 1 G. Accelerate away from or in the same direction as the Earth’s pull on your body, and you create an equal and opposite reaction that you can feel in your weight.

Controlling G-forces is one of the primary concerns in roller coaster design—too many Gs, or too swift a transition between positive and negative G, can tip from thrilling into uncomfortable or even dangerous. 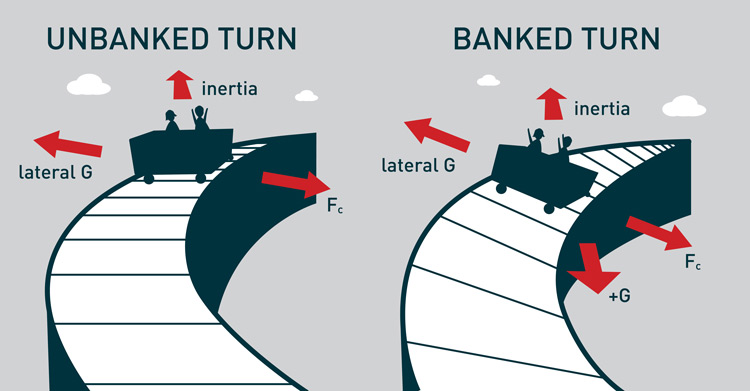 Accelerating around a horizontal turn also creates G-force, in this case called “lateral G.” If strong enough, lateral Gs can sometimes throw passengers against the side of a train car. To avoid this, roller coasters are often built with banked turns. This helps convert some of the lateral G into a positive or negative G, reducing the amount you slide about. 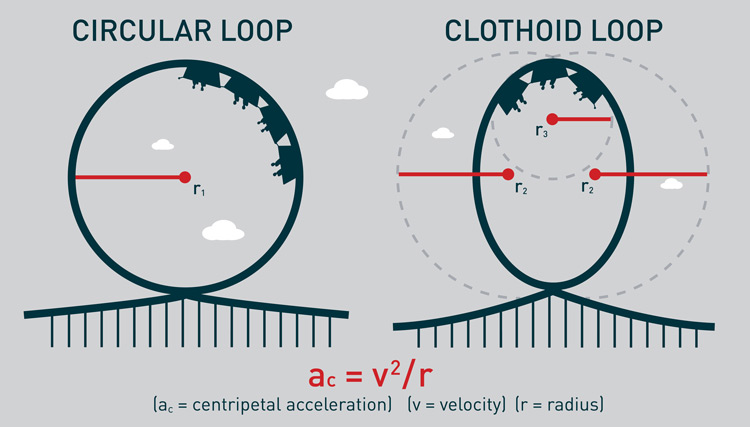 How do you stay in your seat during a loop-de-loop? Again, it’s another balance of physics. Movement along a curved path creates centripetal acceleration, which points to the center of the imaginary circle drawn by the curve. However, you stay in your seat because there’s another factor at play: inertia. Your body naturally wants to keep going in a straight path, and this combined with centripetal acceleration creates a feeling of being pushed outward—a phenomenon sometimes called “centrifugal force,” though like G-force it’s not really a proper force.

If you look at a modern roller coaster, you might notice that the loop-de-loops are shaped more like teardrops than like circles. This shape, called a clothoid, uses simple physics to make it easier on both the train and passengers. The key factor is the fact that unlike a circular loop, which has a single radius, the clothoid loop has a smaller radius on top.

For a deeper dive into clothoids and the physics of loop-de-loops, check out this informative page produced by the University of Gothenburg and Sweden’s Liseberg amusement park.

Now, hopefully, you’ll know enough about the forces behind roller coasters to keep your friends and family entertained while you all wait in line to experience the thrilling terror of physics.