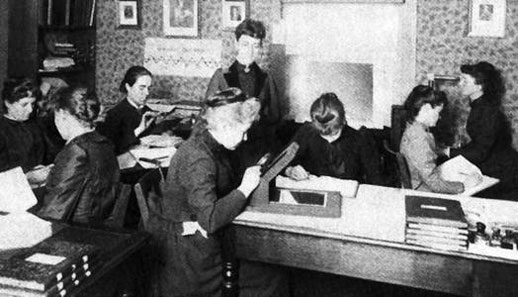 The final installment of this series on science’s elusive women will focus on English-American astronomer Cecilia Payne-Gaposchkin and the women of Harvard Observatory. Payne-Gaposchkin was the first scientist to assert, against conventional wisdom at the time, that stars are primarily made of hydrogen and helium. Presented in her 1925 thesis, this conclusion was so radical that she was talked out of presenting it by the senior astronomers with whom she studied. Years later, the community, of course, came around.

Her work at Radcliffe was the first doctoral dissertation in astronomy from Harvard, and it marked a turning point in the establishment of astronomy as a field that is independent from mathematics. She climbed the nomenclature ladder from “assistant” to “astronomer,” becoming Harvard’s first female professor, and later, being named the university’s first female department chair. But she did not climb the ladder alone. Her path was cleared by a number of remarkable women who preceded her.

Working at the Harvard Observatory under the direction of Edward Pickering, they were known as “Pickering’s Harem”, or, more tastefully, “The Harvard Computers.” These women, paid 25 cents an hour, proved to be quite the processing machines. As an assistant, Henrietta Leavitt discovered a correlation between the luminosity of stars and their pulsation periods. This discovery enabled scientists such as Edwin Hubble to calculate the distances between stars, and in turn provided the information needed to measure the galaxy. Williamina Fleming discovered hundreds of variable stars, ten novae, and fifty nebulae—including the Horsehead Nebula. Annie Jump Cannon was an expert at classifying star spectra, and developed a ranking system still used today.

The names of Cecilia Payne-Gaposchkin and many of the female scientists of the Harvard Observatory came to be less familiar than the names of many of the celestial elements they discovered, but together their astronomical impact on the field has became legendary. But they certainly were not the firsts of their kind. No discussion of trail-blazing female astronomers and elusive scientists would be complete without mention of Hypatia of Alexandria (ca. 350- 415 AD), likely to be the first female astronomer and mathematician.