Sound and Vision: Using Music in Film to Manipulate Emotions

Associate Professor of Music Education and Co-Editor of The Psychology of Music in Multimedia Scott Lipscomb discusses his research interests in movie soundtracks and the use of music in film to manipulate emotional responses.

What a privilege it was f 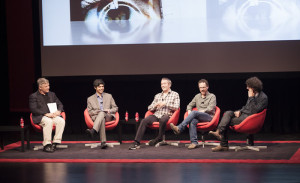 or me to attend the World Science Festival The Art of the Score: The Mind, Music, and Moving Images, a co-presentation by World Science Festival and the New York Philharmonic. program discussion, which explored the role of music in motion pictures and how the brain processes this experience. Think back to when you were last in a movie theater as the lights were dimmed, sitting in anticipation of what would confront you through your senses for the next couple of hours. In the late 1980’s, I became so fascinated by the impact of movie soundtracks that it led me to devote a significant amount of my professional life to designing and carrying out research studies to enhance our understanding of this audio-visual relationship.

In 1988, as part of a graduate seminar on the Sociology of Music at UCLA, I chose the role of music in film as my topic of interest. After reviewing existing research, I designed a survey that I handed out to audience members leaving a local theater after viewing Gorillas in the Mist (I must confess that part of my motivation for selecting this film was that the “enlightened” audience members leaving such a socially conscious film might be more likely to take pity on a poor graduate student requesting ten minutes of their time). To my delight, dozens of those queried completed the survey. Though the limited space in this blog will not allow me to provide details about that study, there is one outcome that set the course for my two-decade long research trajectory. I had seen the movie a week earlier and had selected three specific scenes during which (a) important events were occurring in the narrative and (b) the music seemed to play a prominent role. There was one exception: in one climactic scene (the discovery of a band of massacred gorillas), there was no music at all. In the survey, I asked participants to tell me whether they remembered the music during each of these scenes. If they did, I asked them to describe the musical sound in as much detail as they were capable. Interestingly, over 25% more of my respondents “remembered” the music during the scene without a musical soundtrack when compared to the other two scenes in which I had considered the music to be extremely prominent!

My research since that time has involved the study of the congruence between musical sound and the visually represented narrative (a study incorporating scenes from Star Trek IV: The Voyage Home) and the synchronization of important events in the auditory and visual modalities (incorporating simple, researcher-created animations, experimental animations by Canadian animator Norman McLaren, and excerpts from Brian DePalma’s Obsession). In addition to my own studies, Annabel Cohen, Siu-Lan Tan, Roger Kendall, Marilyn Boltz, Zohar Eitan, Shin-ichiro Iwamiya, and many other researchers have confirmed again and again that audience members develop expectations for the type(s) of music that are congruent with a given visual and/or narrative context. For most viewers, these expectations are generated largely at the subconscious level and are likely to be a direct result of past exposure to movies through which composers have arrived at what might be considered a set of musical “conventions.”

However, we can all think of examples in which the music does not match what appears to be developing as part of the visual narrative and dialogue. For example, in the context of a slasher film, if several fun-loving teenagers are talking and laughing amongst themselves, but mid-conversation the musical score introduces an ominous, low synthesizer tone (a la Alan Howarth horror film scores), the incongruity between the laughing teenagers and the menacing musical sound will trigger an emotional response in the viewer-listener. In such situations, while the visual portion of the film may portray one meaning, the musical score is allowed to express a different (in this case, underlying psychological) meaning, providing a sense of foreboding…a harbinger of unpleasant events likely to follow. In his superb book Emotion and Meaning in Music (1956), Leonard B. Meyers states that “emotion or affect is aroused when [an expectation] is arrested or inhibited” (p. 14). In other words, similar to George Mandler’s (1984) theory of emotion, when something unexpected occurs, it triggers a cognitive attempt to explain the incongruity; this state often results in biological arousal of the autonomic nervous system and an associated emotional response.

Skilled composers are able to artfully manipulate our emotional responses by balancing the expected with the unexpected. Those at the very top of their game, including Carter Burwell, who was also a panelist at Art of the Score, have proven extremely accomplished at using their skillful manipulations to pull at our heart strings, to bring tears to our eyes, or to terrify us.