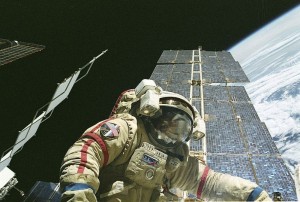 The future of international cooperation in space suffered another blow this week. In response to  the U.S. government’s plans to enact trade sanctions against Russia as a reaction to the escalating Crimean conflict, deputy prime minister Dmitry Rogozin hinted in a press conference on Tuesday that Russia will reject Washington’s request to keep cooperating on the International Space Station beyond 2020.

“We are very concerned about continuing to develop hi-tech projects with such an unreliable partner as the United States, which politicizes everything,” Rogozin said, according to The Guardian.

However, NASA said Tuesday that it had not yet received any official notice from the Russian government that there was any change in their working relationship. Since the space shuttle program was shut down in 2011, the U.S. has relied on Russian spacecraft to ferry astronauts back and forth from the ISS, and a Russian-owned and operated segment of the ISS provides guidance and navigation for the whole station.

On April 2, NASA sent out an internal memo to employees past and present, forbidding contact with their Russian counterparts (save for International Space Station-related activities) because of Russia’s invasion of Crimea. Retired astronaut Leroy Chiao was stunned by the message.

Chiao, the son of Chinese-American immigrants, logged 229 days in space over his 15-year NASA career. He flew three different missions in the space shuttle program and co-commanded the ISS along with a Russian cosmonaut. He is also one of one of only 166 people to walk in space. Now retired from NASA, Chiao has served on a White House Commission on Human Space Exploration and continues to promote scientific dialogue and cooperation. He’s helping to organize next month’s International Space Medicine Summit in Houston, where he’ll reunite with many of his former Russian colleagues—and friends.

Chiao recently sat down with us to offer his thoughts on NASA’s sobering directive and the dangers of mixing politics and space.

(Note: This interview has been lightly edited and condensed.)

Leroy Chiao: The NASA memo was completely unrealistic and, to be honest, I believe was directed by the State Department and not NASA itself. In the current era of mutual dependency in space, cutting off ties with our Russian partners particularly makes no sense.

Since the Shuttle Program was shut down in 2011, we need them a lot more than they need us, because we are totally reliant on Russian assets for access to the ISS. All crew exchange launches currently take place from Baikonur, Kazakhstan— their equivalent of Cape Canaveral. So from the start we are leveraging from a pretty weak position.

And each of our programs has developed a complete interdependency on each other. The Russians are reliant on our technology and wherewithal to operate the ISS. For example, the ISS would tumble out of control if not for attitude control—keeping the station upright and pointed the right way. This is done with a combination of Russian thrusters and American gyros. The gyros are used to maintain the attitude of station, and periodically they need to be reset, but that is done with thrusters, which are made and operated by the Russians.

If you just rely on the American gyros, they’d control the station for a while, but after they became saturated, they wouldn’t be able to do their job anymore, and the station would be out of control. So you really need both sides working in concert in order to keep the space station properly oriented and sustainable.

I’ve always looked at the Space Station as a great unifier. Keeping this line of communication open and our two teams of astronauts/cosmonauts and scientists working together has proven it can help keep relations from deteriorating in other areas.

Cooperation in Space: A Personal Experience

I trained for three-and-a-half years with the cosmonauts before I flew, and not only did we work well together, but I made lifelong friends with some of these guys. It’s gotten to the point where we work together as a team as well as NASA crews. I know I can count on these guys as well as much as anyone.

The most dramatic example of that relationship was when I was flying on the Soyuz to dock with the ISS, and our automatic pilot system failed. The spacecraft started to speed up as we headed toward the station, instead of slowing down. I was the co-pilot, and Salizhan Shiripov was the commander. The first alarm sounded inside 1000 meters from the ISS.

We switched to manual flying, and I was giving him updates on the system’s status and we got the ship under control just 50 meters from the station We could have all been killed had we collided, and it could have killed the crew on board the ISS as well. But by working together, we were able to save the situation. That’s only because we completely trusted each other.

Where We Go from Here

A lot of critics have called for the United States to be less reliant on Russian rocketry, and I agree. NASA is already looking at other options. The Russian-manufactured RD-180 engines are mainstays of the Atlas 5 rockets, and we have the capability to manufacture them in the United States. But that’s not something that you just turn on. It will take time and a lot of money—probably billions of dollars and at least 5 years. NASA is also committed to supporting development in the commercial sector and will continue to do so, but again…that’s not an immediate solution.

At the moment, NASA has eased up on the messaging of that memo, and our two nations are continuing to cooperate in the ISS operations. I’m hoping that the politicians can learn from the scientists about how important it is to work together for a common good. If this gets escalated to crazy proportions—like a shooting war—a certain casualty would be the international space program.

Chiao on a spacewalk in 2005, wearing a Russian spacesuit. Image Credit: NASA