Do not worry about your troubles in romance: Albert Einstein’s were far greater—and weirder.

A packed house at New York University’s Skirball Center was in attendance for a reading of Alan Alda’s play “Dear Albert” on May 28, the first day of the 2014 World Science Festival. The work, drawing from the personal letters of Einstein (Paul Rudd), his first wife, Mileva Maric (Cynthia Nixon) and other figures in their lives (Francesca Faridany, who also narrates). It’s a humanizing, funny, and at times troubling peek at the heart of the man whom most of us know as just a metonymy for genius with fright-wig hair.

Einstein and Maric’s early correspondence is touching at first, during the early blossoming of their romance as fellow students at the Zurich Polytechnic. They weave sly talks of kissing and grumble about Einstein’s disapproving mother in between enthusiastic paragraphs on physics topics. But there’s a hint of trouble already, with Einstein begging Maric to forgive his occasional moodiness, and her chiding him gently for not coming to see her as often as she likes.

Maric, with whom Nixon invests just with the right amount of tremulousness, does not really have a happy story. Her scientific career is abruptly halted when she becomes pregnant. What happened to that first child, a daughter, is still mostly unknown to history; most educated guesses wager that the girl either died of scarlet fever or was sent off to be adopted. Einstein, a newly minted patent clerk, marries Maric, but she never seems to recover the “cheerfulness” that Einstein prized in women. He eventually turns to his first cousin Elsa (and perhaps had designs on Elsa’s daughter as well). “Complicated” is putting it mildly.

It would be armchair psychoanalysis to come right out and say that Einstein’s passion for a unified theory of physics was the work of a mind seeking simplicity amid complex affairs of the heart. But it’s hardly a stretch to say that Einstein’s truest passion, more than any of the women he loved, was physics. On the last night of his life, Einstein took up his pen—not to write a love letter, but to scratch out a line of equations that were one more crack at a theory of everything.

After the play, World Science Festival co-founder Brian Greene and Alda briefly discussed some of the scientific aspects of Einstein’s work, such as his constant struggle with quantum mechanics, a field he invented but which became a frustration afterwards. “It was like an unruly child,” Greene said.

Greene also provided the audience with a practical demonstration of how gravity works—or rather, doesn’t work— in free fall, another pet subject of Einstein’s. A container of water with holes poked in the bottom will leak; but if you drop the container, you can see that as it is falling, the water stops spraying out the bottom. You could test it yourself with a water bottle (perhaps outside). The container and the water are falling together; in their particular situation, the normal effects of gravity are negated. 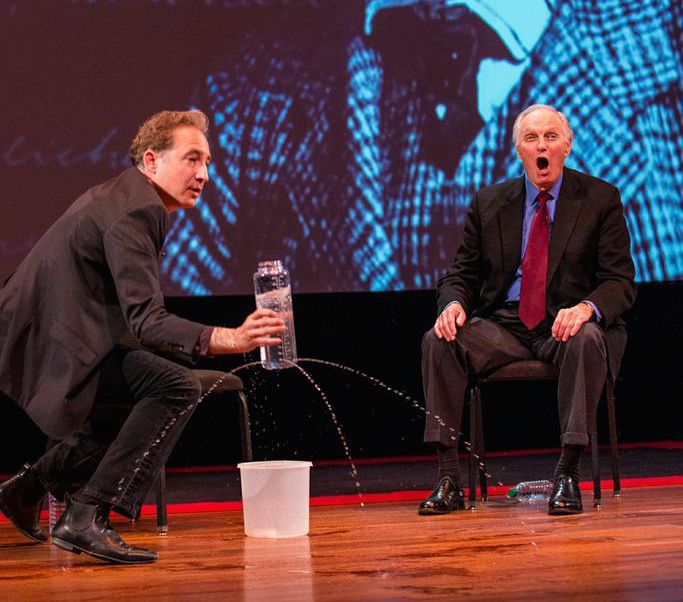 This effect, which Einstein first dreamed up by imagining a person falling of the roof of a house, means that the gravitational mass (how strongly something is affected by gravity) and the inertial mass (how strongly something is accelerated by a given force) of an object are identical, which Einstein dubbed his Equivalence Principle. This was a neat solution to a lingering problem at the heart of his Special Theory of Relativity, which until then had seemed incompatible with Newton’s law of gravity.

Unraveling space-time, it seems, is still relatively easier than balancing matters of the heart.