Whether you already have your summer road trip planned out, or if you’re just looking for a way to pique your curiosity during a local staycation, there’s a host of exciting new museum shows sure to spark a love of science in the whole family. One of these exciting exhibits may be in a city near you, but even if it’s not, it’ll be worth the trip. 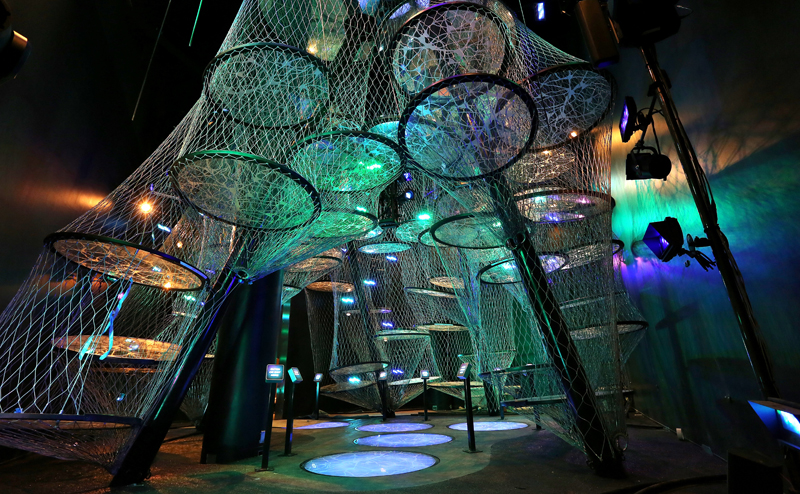 1. Climb through a brain at the Franklin Institute (Philadelphia, PA)

The Franklin Institute exhibit Your Brain offers museumgoers a chance to get up close to all the complicated facets of gray matter. Visitors have the opportunity to “travel through a two-story tall neural network climbing structure with dynamic lighting and sound effects.” You’ll also be able to see a digital collage of the brain compiled from a variety of brain snapshots taken by all the latest cutting-edge neural scanning techniques, and play with a model neuron to see how brain cells send chemical and electrical signals to help guide every move you make, every breath you take, or every thought you think. 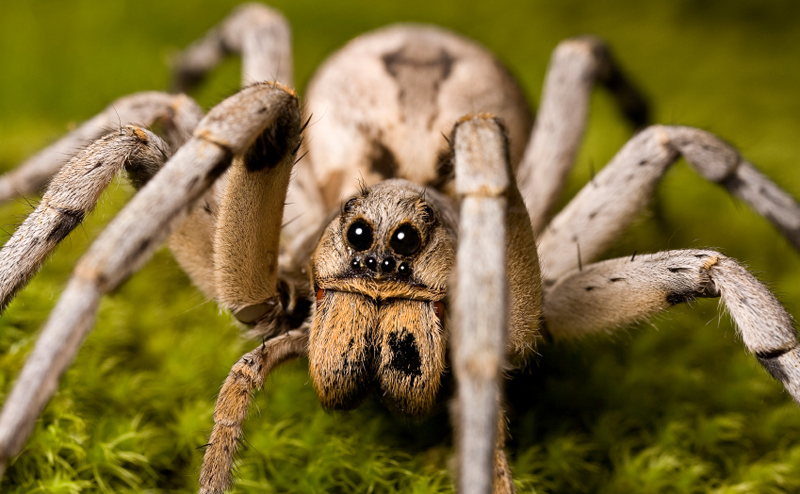 For any spider enthusiasts out there, we shouldn’t have to make much of a case for the AMNH’s new exhibit, Spiders Alive!. If you’re arachnophobic, this exhibit would be the perfect chance to face your fears head-on. Spiders Alive! showcases the stories behind these hardy, versatile, and occasionally creepy members of the order Aranae. Through larger-than-life models, videos, fossils, and live displays, you’ll learn about how spiders spin silk, hunt prey, and defend against predators. Live spiders on display include colorful tarantulas, giant vinegaroons that spout foul-smelling liquid like skunks, and the Goliath bird eater, one of the biggest spiders in the world. Arachnids are crawling on every continent in the world except Antarctica, so you might as well get to know them better. 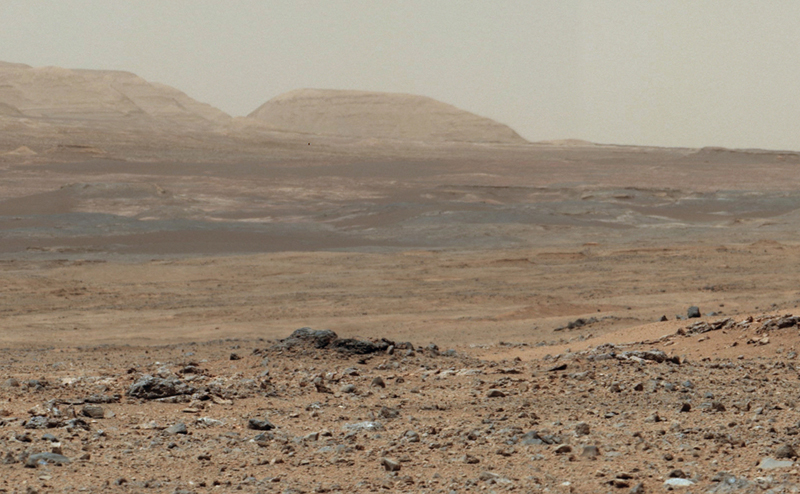 3. Follow the trail of Mars rovers at the Smithsonian National Air and Space Museum (Washington, D.C.)

Spirit & Opportunity: 10 Years Roving Across Mars is a chance to celebrate the phenomenal achievements of the two Mars Exploration Rovers (Curiosity’s older twin siblings) is well worth a trip to the U.S. capital. This exhibit, coinciding with the 10th anniversary of their mission features awe-inspiring images of the Spirit and Opportunity’s voyage to the Red Planet. The rovers landed on Mars in 2004 with the hopes of proving the existence of water on Mars, and were expected to work for around 90 Martian days and travel up to 1 kilometer. The pair went above and beyond the call of duty: Spirit kept on trucking for six years, traveling 7.7 kilometers, while Opportunity is still traveling, notching 38 kilometers so far. 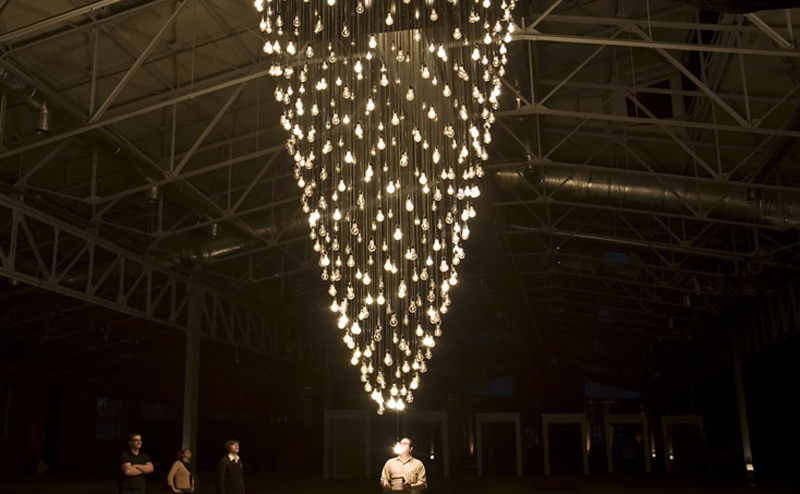 4. Leave your heart at The Exploratorium (San Francisco, CA)

Artist Rafael Lozano-Hemmer is looking to capture your heart—and his latest piece, Pulse Spiral, can do it with little more than a heart-rate sensor, a computer, and 300 incandescent light bulbs. This interactive light installation works by using heartbeat-detecting sensors that are located under an array of light bulbs, arranged in a spiral paraboloid. The bulb closest to you then flashes to the rhythm of your heartbeat. As new recordings of heartbeats are added, the old ones move up the spiral—over time, the pattern displays the internal rhythm of hundreds of people.While a resting human heartbeat tends to be between 60-100 beats per minute, there’s actually a lot of variation based on a person’s age, fitness level, and other individual factors. So why not leave your unique heartbeat in San Francisco this summer? 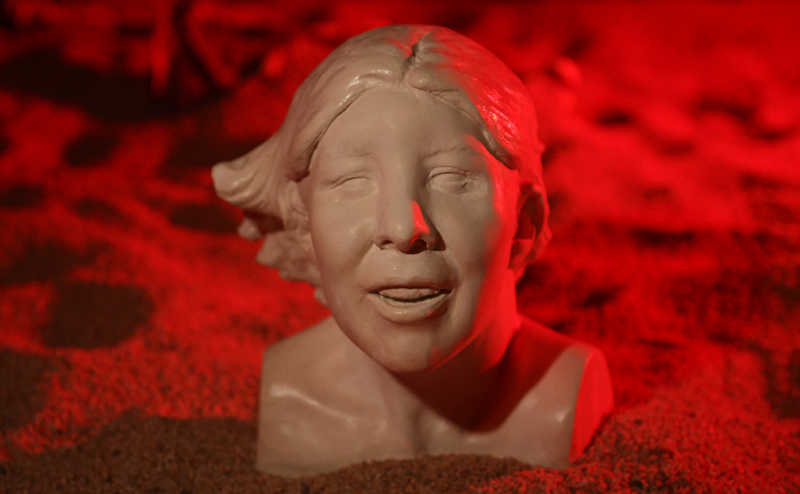 5. Unlock the secrets of ancient Egyptian mummies at the Arizona Science Center in Phoenix, Arizona.

Let real archeologists guide you through the interactive and educational exhibit Lost Egypt: Ancient Secrets, Modern Science, where you’ll find human and animal mummies, ancient artifacts, an Egyptian tomb recreation, and much more. You can explore the mummification process with a life-sized prototype of a mummy in the unwrapping stage, and see how satellite images are being used to uncover long-lost sites. When researchers combine images with thermal and infrared data captured by our eyes in the sky, they can spot previously unknown tombs, pyramids, and other sites—allowing officials to protect these archaeological treasures from looters and construction. 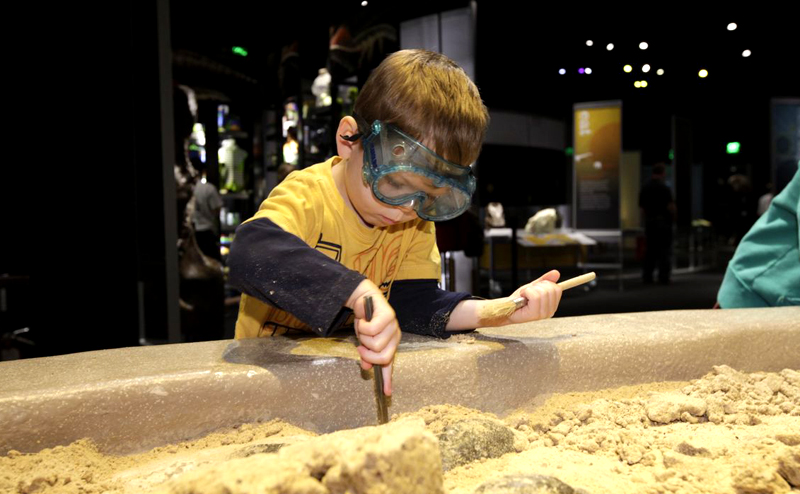 6. Walk in the steps of the world’s largest dinosaurs at the Perot Museum (Dallas, Texas)

Most children were obsessed with dinosaurs at some point. But even the most dino-crazy kid can lose the ability to immediately distinguish between Apatosaurus and Diplodocus. No worries! You can rekindle your childhood fascination with these titanic beasts by playing archaeologist at The World’s Largest Dinosaurs exhibit at the Perot Museum. The new dinosaur exhibit is devoted to the biggest dinosaurs of all, such as Mamenchisaurus, which was 60 feet long—30 feet of that is devoted to the dino’s neck alone. Visitors also get their hands on a simulated fossil dig and see how scientists reconstruct the flesh and skin of these ancient creatures based on the clues locked in fossilized bones. 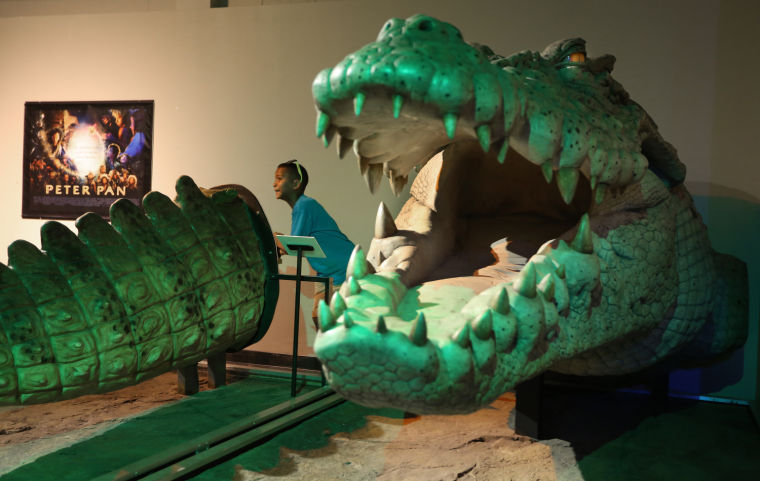 7. Learn how to make a movie monster at the Science Museum of Virginia (Richmond, Virginia)

Peek behind the curtain to see how some of your favorite movie monsters are made. At the How to Make a Monster exhibit at the Science Museum of Virginia, you’ll be able to explore the entire process from the design and storyboarding stages to sculpting and molding. See how art and technology combine to create the movements and expressions that bring everything from werewolves to giant crocodiles to life onscreen. 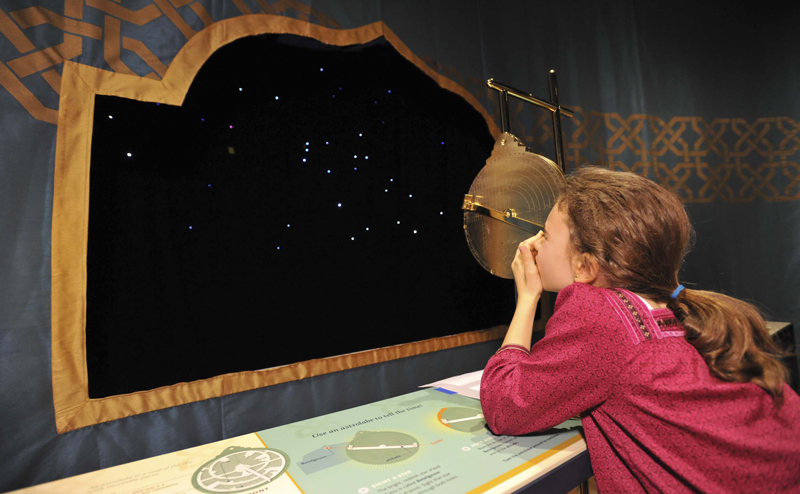 8. Walk the Silk Road at the Cleveland Museum of Natural History (Cleveland, Ohio)

Nowadays, almost anything you can buy can be delivered right to your doorstep in a few days to a few weeks. This was not always the case—many of the common items that we take for granted today, such the spices in your kitchen, had to be transported on camelback through harsh deserts and mountain terrain. You can follow in the footsteps of the greatest of these ancient trade routes at the Traveling the Silk Road exhibit at the Cleveland Museum of Natural History. Visitors can stroll through a full-scale re-creation of a historical night market, explore a 41-foot-long replica of the prow of an Arabian sailing ship, and learn about the spread of ancient technologies, like silk production. Modern silkworm farmers use genetic modification and generations of breeding techniques to get the best product from their squishy workers, but the craft of weaving delicate fabrics from silkmoth caterpillar was practiced in China as early as 3500 BC. 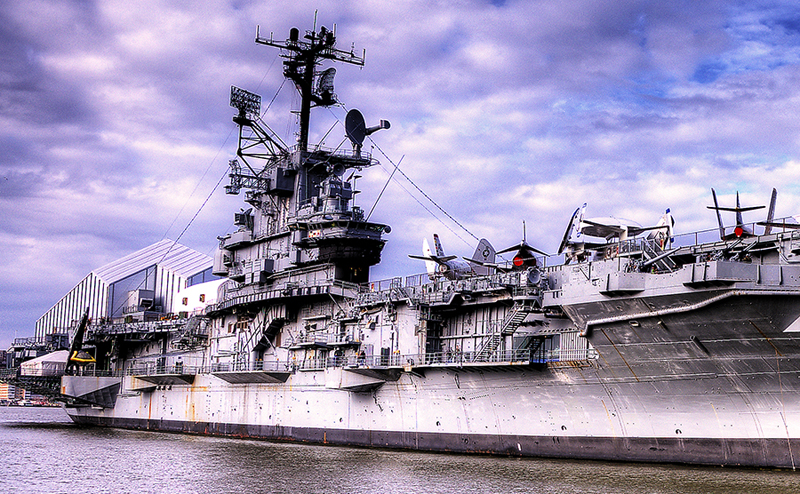 With all the amazing things going on in New York City, it can be hard to pick the right attraction. Let us make your selection process easier by recommending the summer activities aboard The Intrepid Sea, Air & Space Museum, anchored on the bank of the Hudson River. The Intrepid is offering an array of fun and educational summer activities for all ages, including “Submerged,” a new interactive exhibit opening in August that explores how submarines dive and rise (the secret is ballast tanks that can be filled with air or water) and support the crews that live on them. The 6th annual Summer Movie Series on the Intrepid features a host of sea and space-themed films like The Hunt For Red October and Spaceballs. There’s also Astronomy Nights, where visitors have access to high-powered telescopes and the assistance of astronomers for a chance to see the city sky like never before.

The Intrepid’s Salute to Summer runs through August 23. 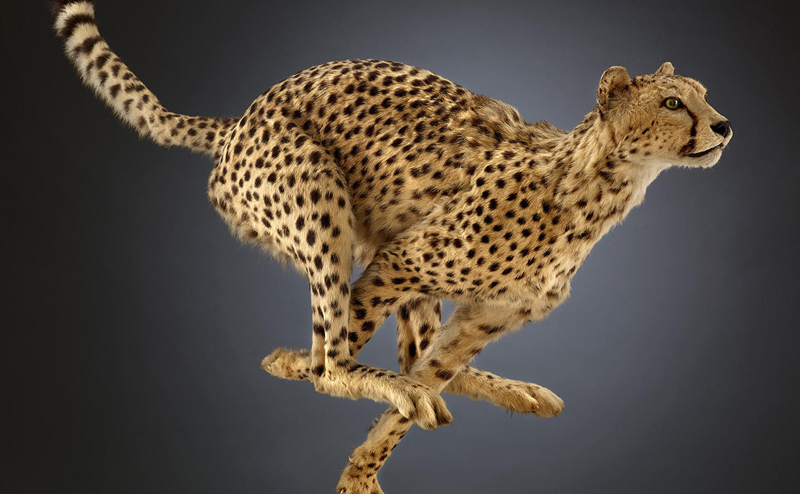 10. Uncover the biomechanical mechanisms inside animals at the Field Museum (Chicago, IL)

You may dread summer heat waves, but you’ll be fascinated to learn the ways that your body, and the bodies of other animals, are able to adapt to harsh weather changes. At The Machine Inside: Biomechanics exhibit at Chicago’s Field Museum, guests are given an inside look at the incredible role that biomechanics play in our everyday lives and in the incredible feats of the animal kingdom. Discover the secrets of how animal and plant internal machinery helps it survive and thrive—like the flexible skull bones that act like shock absorbers for the woodpecker, allowing it to knock on wood all day without addling its own brains. You can also see how scientists are applying our knowledge of plant and animal biomechanics to exciting new technology.

The Machine Inside runs through January 4, 2015. 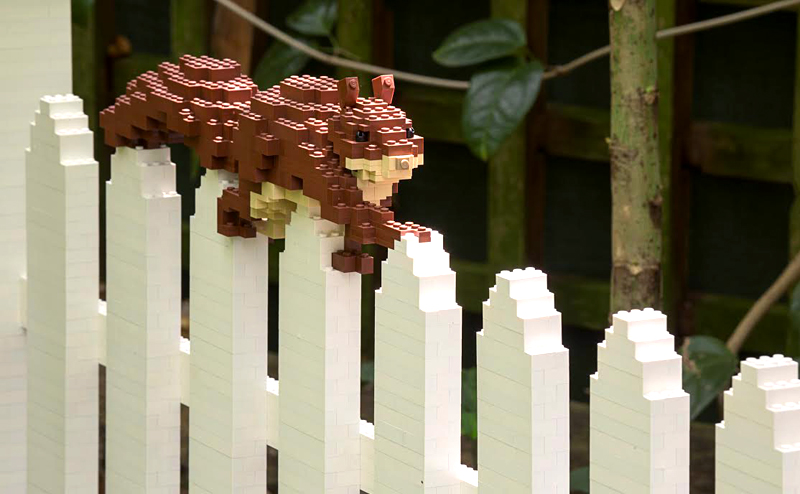 What would you create with 300,000+ LEGO pieces? At the Nature Connects: Art with LEGO exhibit at the Missouri Botanical Garden, New York City-based artist Sean Kenney has made 25 nature-themed LEGO sculptures, from a giant praying mantis to a larger-than-life bald eagle. (Incidentally, the precision of LEGO bricks, which cannot deviate from each other by much more than .002 millimeters, is one of the secrets of its success—thus Kenney can be assured that his 300,000 bricks can snap together easily, no matter if they’re from different sets or not.)  We guarantee you’ll be digging out your old block collection after this visit. 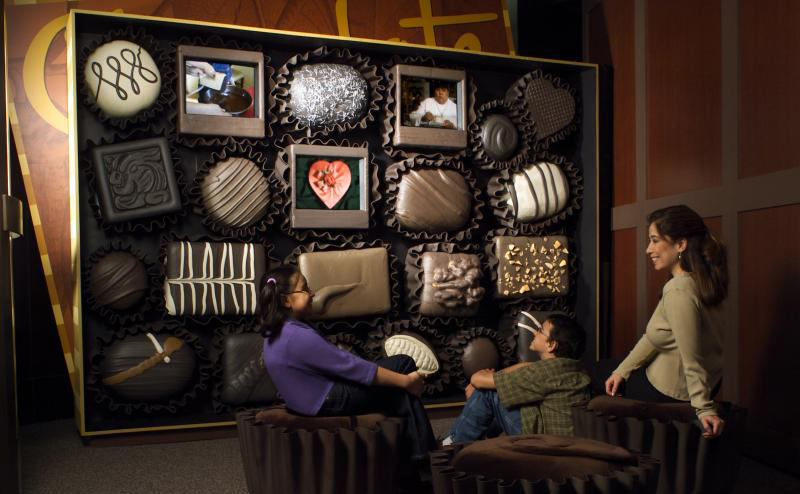 12.  Taste the history and science of chocolate at the Museum of History & Industry (Seattle, Washington)

At Chocolate: The Exhibition, take a trip through the past to learn about the rich and decadent history of the sweetest treats of all. From chocolate’s early beginnings over 1,500 years ago in the rainforests of Central America to the mass-produced sweets we consume today, the exhibition will open your eyes and engage your tongue in the science of chocolate (such as the physics of how roasting can bring sweetness to the bitter cocoa nib). The museum is also hosting chocolate-making demonstrations, chocolate tastings, and a chocolate movie night on August 23 pairing Willy Wonka and the Chocolate Factory and Chocolat.

Chocolate: The Exhibition runs through September 28, 2014.