Coming Out Of The Laboratory Closet 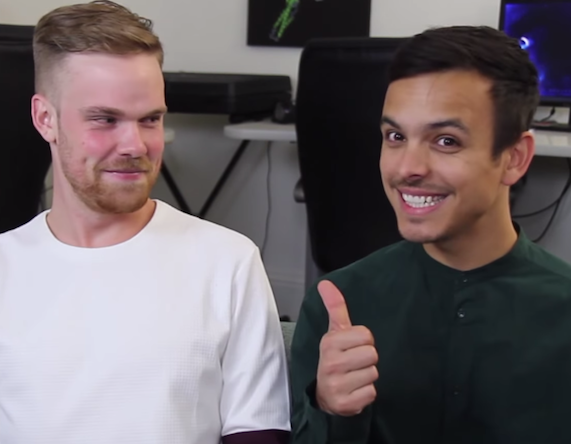 Just this month, Greg Brown and Mitch Moffitt, the hosts of the popular YouTube science show AsapSCIENCE, came out as a gay couple to viewers in a new video. We’re so pleased that this pair can come out in a proud and public way—for it was not always thus. It being Pride Month, we wanted to take a brief look at the experiences of LGBT people in science. While you might assume that science would be a more enlightened and welcoming field for people of different orientations and gender presentations, history tells a different story. Even very recently, scientists have had to keep their identities hidden to avoid hurting their careers, or endangering their lives.

It’s hard to tell just how many prominent scientists of the past may have been LGBT, but the National Organization of Gay and Lesbian Scientists and Technical Professionals keeps a roster of some notable examples. Many of these, however, were stealthy about their orientation. Sara Josephine Baker, the physician who tracked down “Typhoid Mary” and helped introduce hygienic practices and preventative medicine procedures that drastically reduced infant mortality in New York City around the turn of the 20th century, spent most of her life with the Australian novelist and self-described “woman-oriented woman” Ida Wylie. But Baker never spoke much about her personal life.

Unfortunately, the story of one of the most iconic gay scientists, English mathematician and code-breaker Alan Turing, is intertwined with the vile treatment he suffered at the hands of his country. During World War II, Turing crunched the numbers that helped crack the code of the German’s Enigma machine and later wrote pioneering papers in computer science and artificial intelligence.

But in 1952, after he went to the police to report a theft, Turing admitted to having had sex with a man named Arnold Murray. Subsequently, Turing was prosecuted under an 1885 law prohibiting “gross indecency” between two men and eventually ordered to take hormone treatments (at first by tablet, later with an implant in the thigh) to reduce his libido. Turing later died from cyanide poisoning—possibly self-inflicted, via a poisoned apple, but this is still disputed.

Even after the advent of the gay rights movement, some scientists have been hesitant to trumpet their exit from the closet. NASA astronaut and first American woman in space Sally Ride’s only public acknowledgement of her relationship with partner Tam O’Shaughnessy came in her 2012 obituary.

“It’s scary to be open because you don’t realize the impact that it might have on so many aspects of your life,” O’Shaughnessy told the Human Rights Campaign. “You worry about grants, about whether you’ll be able to continue writing children’s textbooks; we were scared that if sponsors knew the founders of Sally Ride Science were two lesbians, that would affect our organization.”

Even today, it’s hard to gauge how accepting science is of LGBT researchers because there actually hasn’t been much investigation of them, even down to just the basic question of how many LGBT scientists there are out there. To address this, University of Minnesota Twin Cities postdoctoral student Jeremy Yoder and California State University, Los Angeles researcher Allison Mattheis surveyed 1,400 scientists for the “Queer in STEM” survey.

“For LGBTQ folks, we don’t even know if we’re underrepresented in sciences,” Yoder told the Minnesota Daily. “One of the basic motivations is to see who is out there.”

Hearteningly, the preliminary data from Yoder and Mattheis’ survey shows that most participants find their workplaces safe and welcoming. Interestingly, the survey showed that where researchers lived made no difference in whether or not they were out to colleagues or their students.

Still, many scientists perceive that a certain stigma persists against coming out; that speaking up about one’s identity might be seen as an unnecessary distraction in the workplace. Northwestern University endocrinologist Neena Schwartz, who wrote about her experiences as a lesbian researcher in her autobiography A Lab of My Own, says that the culture of laboratory work can reinforce this stigma:

“In science, you work in unusually close quarters with other people, and you don’t talk much about your personal life,” Schwartz told Boing Boing. “But if nobody asks you, and you never tell, your sexuality becomes like this elephant in the room.”

University of York chemist David Smith echoed this sentiment in a piece for Chemistry World, noting that many scientists want to avoid discussing LGBT issues, believing that research is all that matters or that, in this more progressive era, there’s no need now to make a big fuss about them. But Smith says that he knows from conversations with his students that having LGBT role models is important to many of them.

“Does it matter that I am a gay scientist? It certainly doesn’t make me a better or worse scientist, but I believe it matters that people know,” Smith wrote. “So I make the choice to tell them.”

An environment where LGBT scientists can be comfortable opening up about their identities can only be a boon for science, opening it up to participation in (and appreciation by) a wider and wider audience.

“Some people argue that sexuality has no place in science in the first place,” Moffitt says. “But it’s so important that people have role models and figureheads of all different backgrounds, whether it be diverse sexualities, races, or genders, as a catalyst to inspire future generations.”