is not just a biography of Planned Parenthood’s founder; it’s also a dynamic graphic novel, combining Bagge’s frenetic style with a portrait of a powerful woman who altered American society in deep ways. We had a chance to catch up with Peter Bagge and discuss some of the more interesting and controversial aspects of Sanger’s social and scientific crusade: 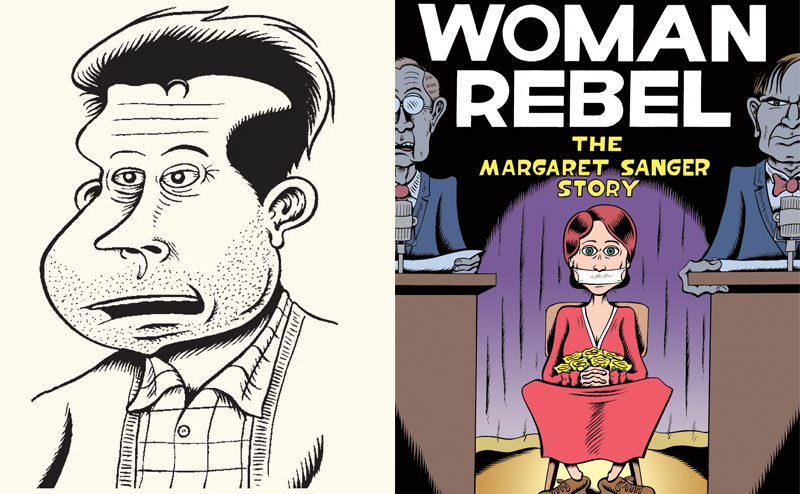 World Science Festival: Can you talk about what your version of Sanger’s life is, as opposed to the slew of portraits found on the internet these days? What are the discrepancies, and why is she so controversial still?

Peter Bagge: What most people think of Sanger is based on short, sweeping and almost entirely false generalizations that have spread across the internet like a plague.  These have been created and continue to be spread by people who are opposed to abortion—due to the fact that she’s the principal founder of Planned Parenthood, which has become the U.S’s largest abortion provider.  So attacking and denigrating Sanger is a way to discredit Planned Parenthood…

WSF: …which is ironic, since Sanger herself was actually against abortion. If she were alive today, do you think she’d be pleased with the direction of both the organization and society at large (in regards to birth control?)

PB: Pro-choice people always assume she’d be on their side of the debate if she were alive today, while most pro-lifers refuse to believe she was ever against abortion, in spite of the overwhelming evidence that she in fact was.  I have no idea what her opinions on the matter would be today.  It’s impossible to know, but there was no doubt that her opposition to it was moral as well as practical.  She routinely referred to abortion as “killing.”

WSF: Sanger is often criticized for embracing eugenics, but you argue that Sanger was actually at odds with many eugenic positions. Can you explain the whole eugenics movement in relation to Sanger’s work?

PB: Sanger actually jumped on the eugenics bandwagon as a way to further promote and legitimize her birth control movement.  That was all she really cared about, to be honest, though there’s no doubt that having fewer children and spacing their births is good for the health and well-being of both a mother and her children.  There was no doubt about it back then either, but it simply wasn’t talked about.  It was illegal to talk about it, as was any discussion of gynecological health in general.  These are the “crazy”, “out there,” “evil” eugenic beliefs that Sanger is demonized for today.

Few people today are able to talk rationally about the eugenics movement of the early 20th century because it has become synonymous with Hitler and Nazism. The word means “good genes,” and the purpose of the movement was to improve the health and well being of future generations—something we still strive for, of course, only we don’t use that word anymore to describe the same goal.  Scientists and social reformers of that time who held negative opinions towards non-Northern European ethnic groups infused their eugenic beliefs with “racial purity.”  Sanger did not share this view, and neither did many others, but good luck tying to explain that to any left-wing or right-wing ideologue these days.

WSF: Sanger’s medical journal, The Birth Control Review, as well as her book The Pivot of Civilization were attempts at arguing her cause using science, presumably with the hopes of drumming up support from medical professionals. Do you know what sort of scientific arguments and evidence she used?
PB: What greatly fueled the eugenics movement in the early 1920s was the huge amount of data collected from the draftees of World War 1.  The average inductee’s health was way worse than anyone even imagined, which lead to a huge crusade to improve Americans’ health overall (though exactly how to do that was the source of much debate and controversy, both then and now).  Part of this was the more aggressive collection of health data of women as well as men, since prior to this both Sanger and her opponents had very few statistics to back up their arguments (as a result, both sides used to make a lot of stuff up out of thin air).  Collecting data remained a major obsession of Sanger’s for the rest of her career, and in fact wound up taking up most of her time.

WSF: One of the first powerful moments in the book happens when Sanger, as a young nurse, assists a doctor in saving the life of a poor tenement woman who almost died performing an abortion on herself. The woman wants to know how to prevent future pregnancies, but instead of helping her, the doctor judges her for “wanting her cake and eating it, too,” as if she deserves such a miserable life for simply having sex with her husband. Can you elaborate on the medical profession’s position on birth control at the time?

PB: The public at large still supported the ban on such information!  It had almost everything to do with people’s queasiness about discussing sexual matters, as well as the all-too-human tendency to get on our high horses regarding other people’s sexual behavior.  Even today, if a man is unexpectedly hit with a paternity suit, most people will just say “he should have kept his pants on” or something equally disparaging and dismissive. This notion that people deserve to pay a heavy price for having sex never goes away —we just alter who’s deserving of our scorn, depending on the politics and the norms of the day.

WSF: Margaret Sanger was anti-abortion, pro-free love, anti-masturbation, and completely okay with homosexuality- a strange cluster of opinions to modern eyes. How do you think she came to such beliefs?

Her attitude towards homosexuality was even more interesting, in that she didn’t have one!  She acknowledged its existence, of course, but she had no opinions on the subject at all.  It simply wasn’t on her radar.

Check out this excerpt from Rebel Woman, delving further into Sanger’s relationship to eugenics… 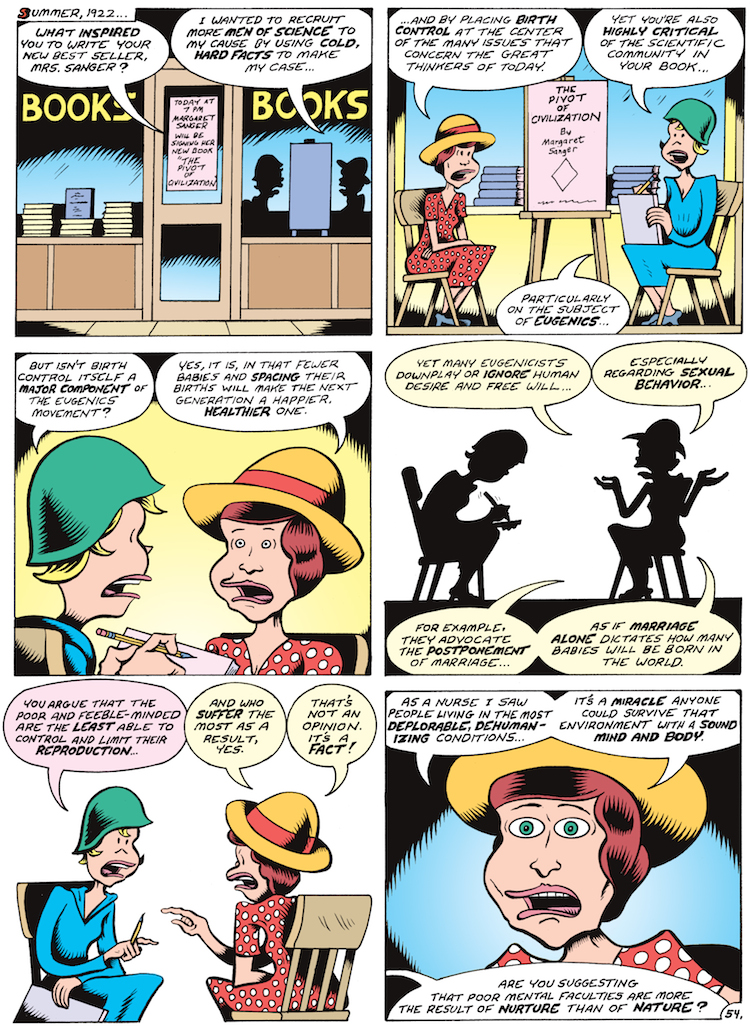 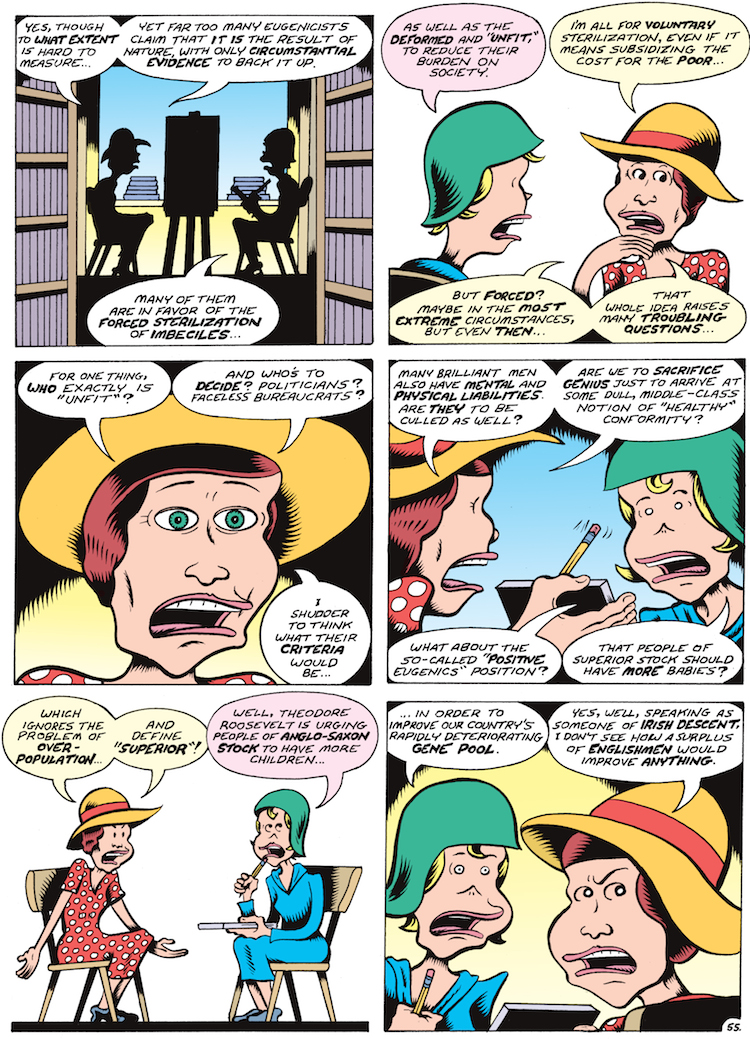