This Is Your Brain On Dogs 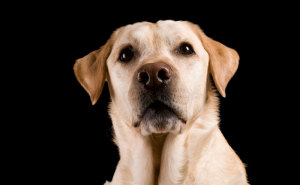 Many dog owners feel like their pets are like their children—and your brain seems to think so, too. In a new study published in the journal PLOS ONE, researchers at Massachusetts General Hospital investigated differences in brain activity when women volunteers viewed pictures of their dogs, their children, and unfamiliar dogs and children. What they found suggests that the bond between human and pup tugs at some of the same heartstrings—or rather, brainstrings—as the bond between mother and child.

The MGH team analyzed functional MRI data for 14 women, each with at least one child between two and 10 years old and a pet dog that had been owned for at least two years. In the course of the experiment, the women were shown a series of photographs: of their child, of their dog, and of unfamiliar dogs and children. The MRI machine paints a portrait of the participants’ brain activity while viewing the images, by detecting changes in blood flow and oxygen levels in different brain structures.

The MRI data showed “substantial overlap in brain activation patterns in regions involved in reward, emotion, and affiliation elicited by images of both a mother’s own child and dog,” the authors wrote. But there were some key differences: Photos of a woman’s own child elicited a response in a brain region called the substantia nigra/ventral tegmental area, linked to bond formation; photographs of a beloved dog did not provoke a response there. But pictures of a woman’s own dog sparked greater activity in the fusiform gyrus, a brain structure involved in facial recognition, than even pictures of a person’s own child. The researchers think this might stem from the fact that with dogs, people rely much more on visual cues than the verbal communication they have with children.

“These results demonstrate that the mother-child and mother-dog bond share aspects of emotional experience and patterns of brain function, but there are also brain-behavior differences that may reflect the distinct evolutionary underpinning of these relationships,” the authors wrote.

Other scientists have explored the human-dog relationship from the canine point of view. Neurobiologists in Budapest used brain scanners to investigate how dogs detect emotions in both human and dog vocalizations (training the canines to get in the MRI scanner and hold still was a job in and of itself); they discovered that there are, indeed dog brain regions that light up preferentially when hearing human or dog emotional cues. And a group of veterinary scientists from Vienna found that dogs, like young children, are much more eager to explore new environments with their caregiver around—something that in child psychology is called the “secure base effect.”

The MGH team notes that their latest study is just a small sample; it remains to be seen if the same brain activity patterns they saw in this group of dog owners would show up in women without children, women with adopted children, men, or in cat owners—although in this last case, the scientific literature suggests that affection might be a one-way street.