You may think the Universe began with a big bang, but really, as World Science Festival co-founder and Columbia University physicist Brian Greene points out, the Big Bang explains how the Universe evolved. A small difference but an important one. Scientists just don’t know what propelled that primordial push that launched the universe on its expansionary path.

And even the Big Bang theory doesn’t fully explain how things started from nothing, then burst into the makings of what would become the Universe. In fact, there is considerable debate in the physics community about just what happened in the few infinitesimally small fractions of a second after T=0. For example, there are some puzzling features of our universe that can only be explained, some scientists argue, by the idea that our universe went through a short period (from somewhere in the vicinity of about 10−33 to 10−32 seconds after the Big Bang) of rapid expansion (by what scientists believe to be around a factor of 1026) after it emerged into existence. This idea is known as the theory of inflation, and is a widely accepted but still debated part of our universe’s beginnings. 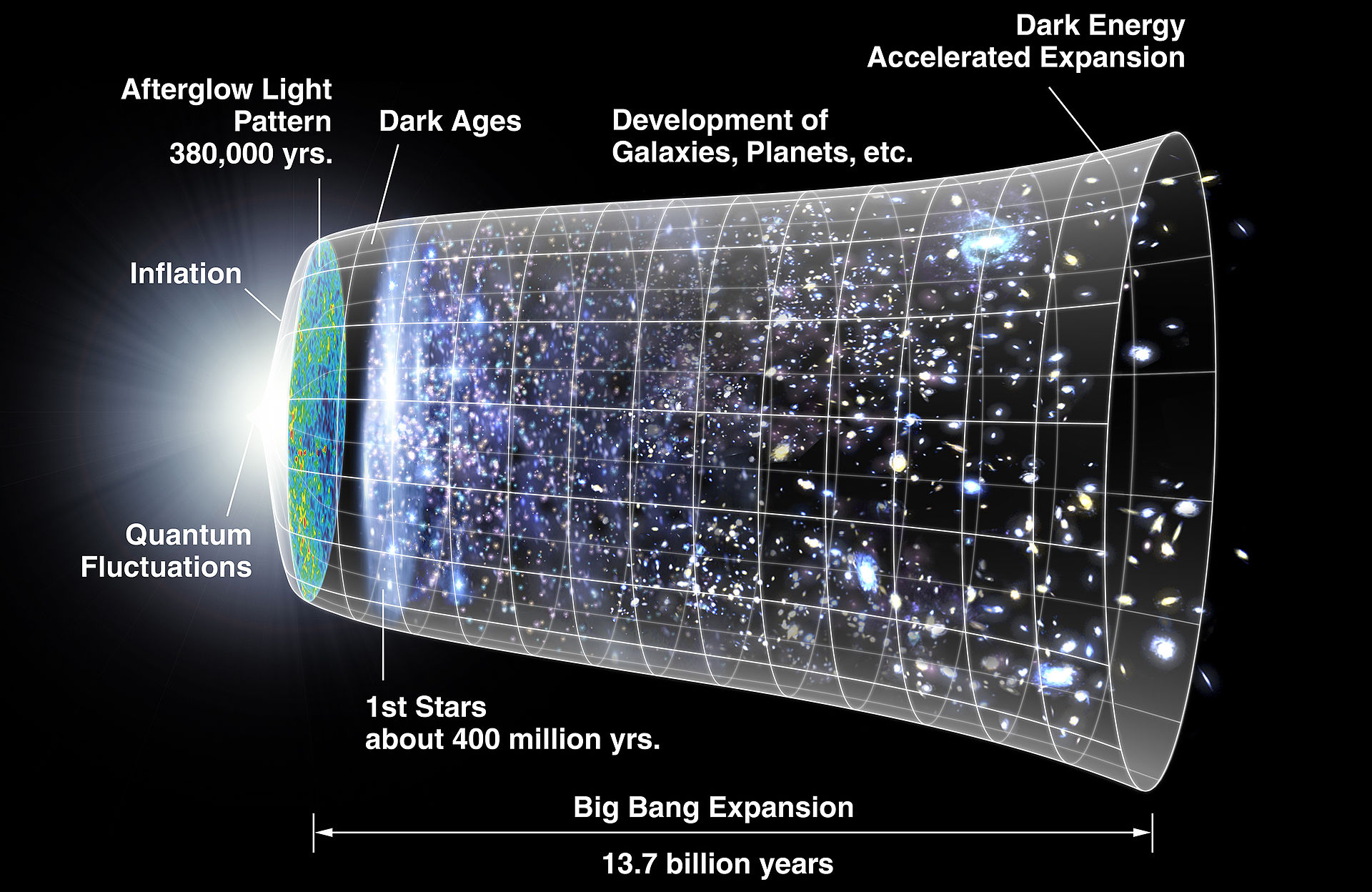 Before the Big Bang theory was proposed in the 20th century, most physicists were enamored of the “steady state theory,” in which the universe has no real beginning or end. But in 1964, radio astronomers Arno Penzias and Robert Wilson at Bell Labs accidentally found proof of the Big Bang while investigating a persistent background noise permeating their observations. At first, they thought it was radio contamination from cities, or extraterrestrial radio sources, or even interference generated by pigeons living in the antenna. But after these were all ruled out, it turned out that the static Penzias and Wilson had discovered was the low-level radiation left over from the formation of the first atoms—the “afterglow” of the big bang.

But the more that scientists began to study the cosmic microwave background radiation, the more perturbed they were by something that came to be known as the horizon problem. Different regions of our universe have basically the same temperature and properties, an observation that seems odd; given its vast size, far-flung regions should have some marked differences since there hasn’t been enough time in the history of the universe for information to travel at light speed between its opposite sides. We had no good way to resolve this conundrum—until inflation entered the picture, thanks primarily to the physicists Alan Guth of MIT, Alexei Starobinsky of the Landau Institute for Theoretical Physics, Paul Steinhardt of Princeton University, Andreas Albrecht of University of California, Davis, and Andrei Linde of Stanford University.

In the video clip below from the 2013 World Science Festival program “Multiverse: One Universe or Many?” Guth gives a breakdown of some of the basics of inflationary theory, and how it fills in the gaps of the Big Bang—such as why it went bang in the first place, thanks to a curious behavior of gravity, which can act repulsively rather than attractively in some circumstances.

But coming up with the idea of inflation didn’t immediately explain everything. While inflation accounted for the homogeneity we see in the universe, it could also make the universe too uniform—matter needs to clump together in places to make galaxies, stars, and all the other stuff we see. The solution in the model, physicists argued, can be found in the tiny fluctuations that arise thanks to the uncertain nature of quantum mechanics. As Brian Greene has explained it, just as a tiny design on a balloon becomes radically bigger when the balloon is inflated, the incredibly tiny quantum fluctuations in the early universe could’ve been blown up to create just enough irregularity in our universe for starstuff to form.

Still, other complications arose. One other consequence of working inflation into the picture, theorists found, is that it makes our understanding of the universe a lot more complicated than just one bang radiating out space and time.

Under the most recent models of cosmological inflation, “the evolution of the universe has no end and may have no beginning,” Linde writes. “After inflation the universe becomes divided into different exponentially large domains inside which properties of elementary particles and even dimension of space-time may be different. Thus the universe looks like a multiverse consisting of many universes with different laws of low-energy physics operating in each of them.”

In the following selection from the 2008 festival program “Beyond Einstein: In Search of the Ultimate Explanation” Stanford physicist Leonard Susskind talks about how new bubble universes can arise out of inflation’s landscape.

And Linde, below, explains how our limited perspective, living as we do in a single facet of the multiverse, colors our perception of it.

While cosmological inflation is an elegant way to tie up a lot of the loose ends in our model of the evolution of the universe with the data at hand, we do need one key thing: proof that it actually happened. In March 2014, it looked like there was going to be some very exciting evidence to bolster the case for inflation. A team of scientists working on the BICEP2 telescope at the South Pole thought they spotted what looked like a curious polarization of the cosmic microwave background. That polarization was thought to be a sign of gravitational waves predicted by inflationary theory—radiating ripples kickstarted by that intense period of inflation that would compress space in one direction and stretch it in another direction.

However, additional research confirmed later that year that the pattern BICEP2 saw did not stem from gravitational waves, but was in fact an artifact of dust in our own galaxy.

Not all physicists accept inflation in the first place. In the 2014 World Science Festival program “Ripples From the Big Bang” (~1:24:00), Princeton University’s Paul Steinhardt, one of the primary architects of the inflationary theory whose perspective on the theory has radically changed, not only called into question the BICEP2 results (with some prescience), but also voiced his fundamental dissatisfaction with the inflationary model.

Another informed critic of inflation is the physicist Neil Turok, the director of the Perimeter Institute for Theoretical Physics and a pioneer of the open inflation model of the universe who also developed observational tests for dark energy and the nature of the relic perturbations using the microwave sky, both subsequently confirmed.

Concerned with the looseness of the inflation model, Turok (partnering with Steinhardt) has used string theory to shape his own view of the universe to one that he thinks is more predictive—a cyclic model model that incorporates just two universes, often called the Ekpyrotic Model. And yet he is not completely satisfied with this idea either, as he relates in the below clip from the “Multiverse” program at the World Science Festival.

Turok and Steinhardt are not the only physicists marshaling string theory to build alternatives to inflation. McGill University physicist Robert Brandenberger and Harvard physicist Cumrun Vafa spun their own take on cosmology and superstring theory with “string gas cosmology” [pdf], another model that claims consistency with current observations but offers a different picture of the beginning of the universe.

Still, despite the disagreements, there is a fair amount of agreement in the cosmological conversations among physicists. As Alan Guth put it, “Science is an arena of competing ideas and right now inflation is by far the most widespread idea in cosmology.”