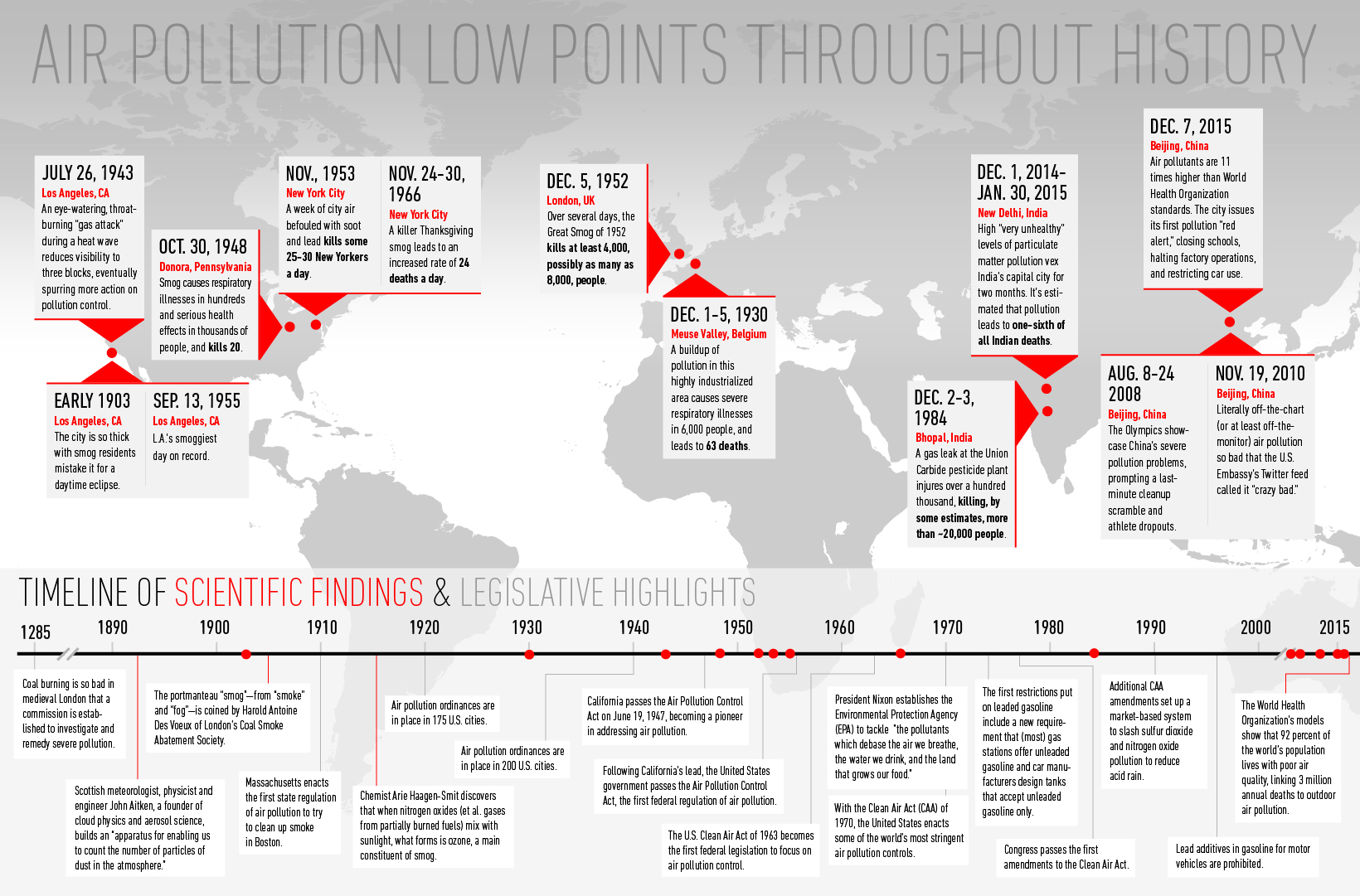 The skies over Donora, Pennsylvania, turned black on October 27, 1948. The darkness would last for five days straight, shrouding the town and its residents in a noxious cloud of carbon monoxide, sulfur dioxide, and metal dust pollution.

A weather inversion, it turns out, had trapped the pollution from a nearby steel plant and zinc smelter in the valley, causing a “burning sensation” in the throat and eyes of many residents in the town of 14,000 and other health problems. By the end of the “killer smog” event, thousands would be sickened and 20 lives claimed.

Some Progress on Air Pollution but Still a Ways to Go

It was a definite low point in the long, dark history of air pollution, but it did help put a spotlight on the problem of air pollution in the United States and spur much-needed changes in environmental protection. (See here [pdf].) Thanks to regulations on tailpipe and stack emissions implemented in the years since, “the United States is definitely better off than in 1948 in terms of air pollution control,” says Stanford University professor Mark Z. Jacobson, author of  Air Pollution and Global Warming: History, Science, and Solutions.

“However, emissions are not zero,” he adds, “and air pollution still kills 60,000-65,000 Americans prematurely each year and injures hundreds of thousands more.”

The numbers are worse in other parts of the world, especially developing countries, where air pollution leads to 4-7 million premature deaths.

“Donora, PA is repeated worldwide today on a daily basis in many cities of the world outside of North America and Europe,” says Jacobson.

“The Indonesian forest fires today are a humanitarian disaster, causing more than 500,000 cases of reported respiratory illness (not including hundreds of thousands more of unreported illness),” says Jacobson.

But manmade fires are also major polluters and have been for some time. Just read the history books. In 61 A.D. Lucius Annaeus Seneca, the Younger wrote, “As soon as I had gotten out of the heavy air of Rome, from the stink of the chimneys and the pestilence, vapors and soot of the air, I felt an alteration to my disposition.“ When the 16th century Spanish explorer Juan Rodriguez Cabrillo discovered California’s San Pedro Bay, he reportedly noted that while the mountain peaks in the distance were visible, their bases were obscured by the smoke from Indian fires.

Today in developing nations around the globe some three billion people use cookstoves that burn solid fuels, which create indoor air pollution that leads to millions of premature deaths each year.

Burning fossil fuels is, of course, another large source of air pollution. Ever since the advent of the Industrial Age, the growth of manufacturing has vaulted air pollution into new realms. Even with the great strides that the United States and Europe have made on the pollution-combatting front, much work is needed to stem the tide of polluted air caused by today’s smokestacks and tailpipes. (See the American Lung Association’s State of the Air report [pdf] for 2015 to see the best and worst cities for air pollution.)

In cities like Beijing (as the 2008 Summer Games so starkly illustrated) and Lingfen in China and New Delhi people suffer on a daily basis from air pollution that is equivalent to smoking 2-3 packs of cigarettes a day.

Ss is it inescapable? Does progress mean pollution? Despite the fact that so many premature deaths result from air pollution even today, Jacobson sees hope.

“If the world electrifies all sectors, and the electricity is obtained from [wind, water, and solar] WWS, then future progress will not result in any further air pollution.”

In the meantime, our infographic captures some of the low points in air pollution as well as some high points of science findings and legislative action that have led to improvements in air quality and saved untold numbers of lives.