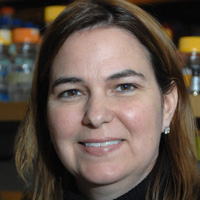 Angela Belcher combines chemistry, molecular biology and electrical engineering to understand how living things make molecular-scale materials and incorporate their tricks into new organic-inorganic hybrid technologies. A materials chemist and the head of the Biomolecular Materials Group at MIT, she has genetically engineered viruses to grow nanoscale structures that can be used in batteries, solar cells, and other clean energy sources. Materials she has developed can also be used to diagnose diseases, and eventually—she hopes—power cars. Belcher is the W. M. Keck Professor of Energy at MIT. She received her Ph.D. and did postdoctoral work at the University of California, Santa Barbara, then became assistant professor of chemistry at the University of Texas, Austin, until joining the MIT faculty in 2002. In the past decade, she has founded two start-ups and has received numerous national awards, including a MacArthur Foundation Fellowship and a Four Star General Recognition Award from the U.S. Army. Scientific American named Belcher “Research Leader of the Year” in 2006, TIME magazine named her a “Hero” in 2007 for her research on climate change, and in 2009, Rolling Stone named her one of the “100 People Who Are Changing the World.”