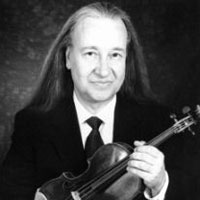 Arturo Delmoni, violinist and violist, has earned critical acclaim in the United States and abroad for his stylish, elegant interpretations of classical masterpieces. His distinctive playing embodies the romantic warmth that was the special province of the great virtuosi of the golden age of violin playing. Delmoni made his debut at Carnegie Hall at age 14 playing the Tchaikovsky Violin Concerto with the Little Orchestra Society under Thomas Scherman. Since then, he has been soloist with the St. Louis, Dallas, Spokane, Jupiter, El Paso, Glendale and Tucson Symphony Orchestras; the Pro Arte Chamber Orchestra of Boston, the California Chamber Symphony, the New York City Ballet Orchestra; the Rhode Island, Brooklyn, Boston, Omaha and Kansas City Philharmonics; and the Boston Pops.

He has appeared as a recitalist throughout the United States and Europe, the Middle East, Japan and Hong Kong. As a chamber musician, Delmoni has performed with colleagues such as Pinchas Zukerman, Andres Cardenes, Elmar Oliveira, Emanuel Ax, Nathaniel Rosen, Jon Kimura Parker, Jeffery Kahane and Dudley Moore. For three months of the year, Delmoni holds the distinguished position of concertmaster of the New York City Ballet. He plays a J.B. Guadagnini, 1780, and a viola from the same period.