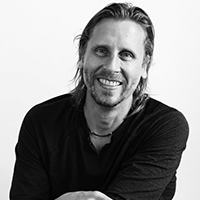 Beau Lotto is a world-renowned neuroscientist who specializes in the biology and psychology of perception. Originally from Seattle, Washington, he has lived in the United Kingdom for over twenty years and currently resides in Oxford. He received his undergraduate degree from University of California Berkeley, his PhD from the University of Edinburgh Medical School, and was a fellow at Duke University. He has been conducting and presenting research on human perception and behavior for more than twenty-five years, has published over sixty publications and two academic books. A professor at the University of London (Goldsmiths) and visiting scholar at NYU, Lotto is also Founder & CEO of an augmented reality startup, Founder and Director of the Lab of Misfits, which is a creative agency grounded in principles of perception. His interest in education, business, and the arts has led him into entrepreneurship and engaging the public with science. He passionately believes in the impact perception research can have on people from all walks of life. He lives in NYC and the United Kingdom.