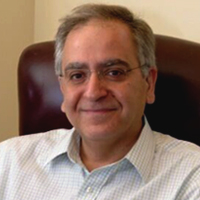 Cumrun Vafa is the Hollis Professor of Mathematicks and Natural Philosophy at Harvard University. He received his BS in Math and Physics from MIT in 1981 and his PhD in Physics from Princeton University under the direction of Edward Witten in 1985. Vafa’s primary area of research is string theory. String theory is at the center of efforts by theoretical physicists to find a unified fundamental theory of nature— that is, all particles and the forces between them—in a consistent quantum theory. In a single theory, one studies the mysteries of confinement of quarks inside atomic nuclei, as well as enigmatic properties of astrophysical objects such as black holes.

String theorists have the exciting task of building new mathematics as tools to explore new laws of physics. Therefore, string theory is at the crossroads of many fields, including mathematics, particle phenomenology and astrophysics—Cumrun Vafa’s research has involved all these aspects. Together with colleagues he has worked on topological strings, tries to elucidate new mathematics originating from string theory, and uses these techniques to uncover the mysteries of black holes, particularly the Bekenstein-Hawking entropy.

Cumrun Vafa is a member of the American Academy of Arts and Sciences and the National Academy of Sciences and has received a number of awards and recognitions for his work including the Dirac Medal of ICTP, the AMS Leonard Eisenbud Prize for Math and Physics, the APS Dannie Heineman Prize in Mathematical Physics and the 2017 Breakthrough Prize in Fundamental Physics. In 2020, Cumrun Vafa released his newest book, Puzzles to Unravel the Universe, exploring the simple mathematical underpinnings that formulate physical laws.