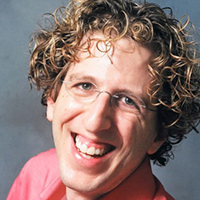 Eitan Grinspun is associate professor of computer science at Columbia University, and Director of the Columbia Computer Graphics Group. His research seeks to discover connections between geometry, physics, and computation, typically with applications to computer graphics. He received his Ph.D. in Computer Science from the California Institute of Technology in 2003, and his B.A.Sc. in engineering science from the University of Toronto in 1997. He was Professeur d’Université Invité in Paris at l’Université Pierre et Marie Curie in 2009, and a Research Scientist at the Courant Institute of Mathematical Sciences in 2003-04, He is an Alfred P. Sloan Research Fellow and NSF CAREER Award recipient, and was previously an NVIDIA Fellow and a Caltech Everhart Distinguished Lecturer. The technologies developed by his laboratory are used in consumer software such as Adobe Photoshop & Illustrator, in film studios such as Disney, Pixar, and Weta Digital, and in physics laboratories at institutions such as MIT and the Université Paris VI. His work has been profiled in The New York Times, Scientific American, and Popular Science (“Brilliant 10”).