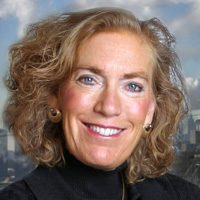 Elaine Fuchs pioneered the field of reverse genetics—studying proteins and learning what they do, and how they do it, in order to identify the genetic disease they cause when they malfunction. She has become internationally known for her work in skin biology, deciphering the characteristics of skin stem cells to explain why some develop into skin and others into hair. Understanding skin stem cells’ normal behavior is also helping Fuchs learn what happens when their growth goes awry, such as in skin cancers.

Now a professor of mammalian skin biology and development at The Rockefeller University and an investigator at the Howard Hughes Medical Institute, Fuchs received her Ph.D. in biochemistry from Princeton University. In 1980, when she joined the biochemistry faculty at the University of Chicago, she was the first woman in the department. Her many awards and honors include the Richard Lounsbery Award from the National Academy of Sciences, the National Medal of Science, and the March of Dimes Prize. She was named one of the Nation’s Outstanding Scientists by the White House in 1985 and holds honorary doctorates from the University of Illinois and the Mount Sinai and New York University Medical Schools.