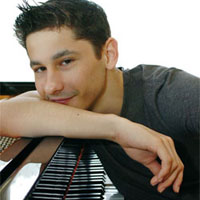 Grammy-nominated Eldar Djangirov is one of the top jazz pianists on the scene today. He has played with many of the masters, including Dave Brubeck, Michael Brecker, Wynton Marsalis and Dr. Billy Taylor. His latest recording Virtue, made it to the Top 20 on Billboard’s Jazz album chart and Jazzweek’s radio chart by the third week. Originally from Kyrgyzstan, Djangirov has toured throughout North America, Europe and Asia, appearing at the Hollywood Bowl, The Kennedy Center and Carnegie Hall, and at the notable jazz venues, including Blue Note (NY, Japan, Italy), the Vanguard, and Dizzy’s at Lincoln Center. He has also appeared at numerous festivals, including IAJE, Lionel Hampton, Jakarta, SXSW and CMJ.