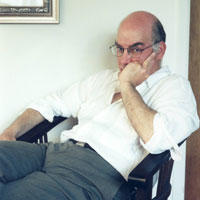 Gregory Chaitin is a mathematician and computer scientist who began making lasting contributions to his field while still a student at the Bronx High School of Science. His approach to mathematics views the field as much as an art form as science and inextricably linked with philosophical questions. He is the chief architect of algorithmic information theory, which measures the complexity of data sets and allows for means of computing that complexity through software programs. He is also discoverer of the remarkable Omega number, the exquisitely long and incalculable representation of randomness and unknowability, which shows that God “plays dice” and that some mathematical truths are accidental. Dr. Chaitin is now trying to create a general mathematical theory of evolution at the forefront of the emerging metabiology field, which regards life as biochemical software, with DNA a natural programming language for building and running organisms parallel to the digital bits of artificial computer software. He is part of a current discussion that regards reality as more information- than analogue-based—in which the design of life is seen to reflect the “mind of God” rather than the “matter of God.”

Dr. Chaitin is the author of a dozen books about mathematics and philosophy, including Conversations with a Mathematician: Math, Art, Science and the Limits of Reason (2002), Meta Math! The Quest for Omega (2005), and Thinking about Gödel & Turing (2007). He worked for many years at the IBM Watson Research Center in New York, where he is currently emeritus.