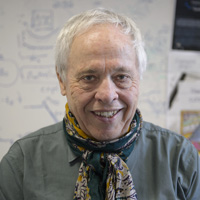 Joseph Silk is Homewood Professor of Physics and Astronomy at Johns Hopkins University in Baltimore, a researcher at Institut d’Astrophysique de Paris, and a Senior Fellow at the Beecroft Institute for Particle Astrophysics and Cosmology at the University of Oxford. He was previously Savilian Professor of Astronomy at the University of Oxford and Professor of Astronomy and Physics at the University of California at Berkeley. Most of his scientific research is related to cosmology and particle astrophysics. His specialties include the cosmic microwave background, formation of the galaxies, and exploration of the nature of the dark matter that is the dominant form of matter in the observable universe. His pioneering predictions of the damping of cosmic microwave background radiation fluctuations have been verified by several recent experiments. He has received the International Balzan Prize for his work and has published several popular books.