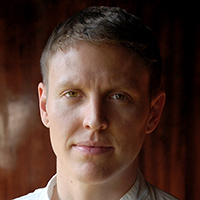 Owen Clark is the executive chef at Gwynnett St., where he started as sous chef on the opening team. Clark has cooked in New York City for seven years. Starting his culinary career in a family style Italian restaurant, he decided to enter a culinary program in Boulder at the Culinary School of the Rockies. The degree helped him land an apprenticeship in the elite Michelin two-starred L’Oustau d’Baumaniere in Les Baux- de- Provence, France. Clark then earned another apprenticeship in Europe at The Fat Duck in Bray, England. The restaurant was rated the best in the world by Restaurant Magazine. From there he was invited to cook at WD-50 in New York City‘s Lower East Side. He spent two years rising through the ranks and learning more than he ever thought possible about flavor pairings, technique, and modern styles of cuisine. After leaving WD-50, Clark was attracted to Blue Hill restaurant for its seasonality and emphasis on sustainable ingredients. He worked for two years with Dan Barber, a James Beard award winner and one of TIME Magazine’s 50 most influential people of 2009.