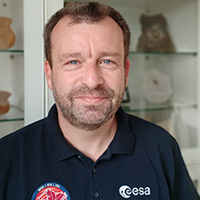 Pierre Ferruit is the European Space Agency’s project scientist for the James Webb Space Telescope, where he has been overseeing the development and implementation of NIRSpec, one of four scientific instruments on JWST. His main field of interest is the formation and evolution of galaxies, but his work on NIRSpec has led to collaborations with other scientists on a wide range of topics, including exoplanets and solar system studies.