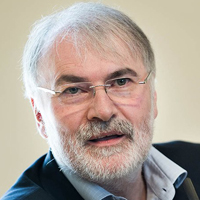 Marco Bersanelli is Professor of Astronomy and Astrophysics and Director of the Ph.D. School in Physics, Astrophysics and Applied Physics at the University of Milan, Italy. His main field of research is cosmology, in particular observations of the cosmic microwave background, the relic radiation from the early universe. Since 1992 he has been playing a leading role in the PLANCK space mission, the European Space Agency satellite dedicated to cosmology, successfully launched in 2009 from Kourou, French Guiana. He has been a member of the PLANCK Science Team since its formation in 1995. He is author of more than two-hundred scientific papers as well as of several interdisciplinary essays and popular articles.