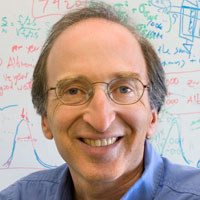 Saul Perlmutter is a professor in Berkeley’s Department of Physics and a senior scientist at the Lawrence Berkeley National Laboratory. He is the leader of the Supernova Cosmology Project, an international collaboration of research teams from seven countries measuring the expansion history of the universe. He received his AB from Harvard in 1981 and his PhD in physics from UC Berkeley in 1986.

Perlmutter is an elected member of the National Academy of Sciences and the American Academy of Arts and Sciences, and a fellow of the American Physical Society and the American Association for the Advancement of Science. The American Association for the Advancement of Science named the measurements (by the Supernova Cosmology Project and the High-Z SN Search) indicating an accelerating universe “Science Magazine’s 1998 Breakthrough of the Year.” Among his prizes, he has received the E.O. Lawrence Award in Physics from the U.S. Department of Energy, the Henri Chretien Award from the American Astronomical Society, the 2006 International Antonio Feltrinelli Prize, and shared the Padua Prize (“Padova Citta Delle Stelle”), the Shaw Prize in Astronomy, and the 2007 Gruber Cosmology Prize.

Perlmutter is the author of more than 100 papers in the fields of physics, astrophysics, and cosmology, in which he has addressed such topics as the cosmological constant, dark energy, supernovae, pulsars, gravitational lenses, massive compact halo objects and advanced detector systems for astrophysics. At Berkeley, he has developed a course for non-scientists on “Physics & Music.” He has written numerous articles for both academic and popular publications, is a frequently invited lecturer and author, and has appeared in PBS and BBC cosmology documentaries.