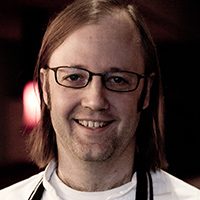 Wylie Dufresne opened WD-50 in 2003, on Manhattan’s Lower East Side. His partners in the venture are Chef Jean-Georges Vongerichten and restaurateur Phil Suarez. In 2008, Frank Bruni of The New York Times awarded WD-50 three stars. In 2006, in the Michelin Guide’s inaugural American edition, WD-50 received one star, which it has retained in each subsequent year. Dufresne studied at the French Culinary Institute in New York and was then employed at Jo Jo’s from 1994 to 1997. He was hired to work on the opening of Jean Georges, eventually becoming the sous chef. In 1998, Dufresne was hired as chef de cuisine at Vongerichten’s Prime in The Bellagio, Las Vegas. In 1999, he left Prime to become the first chef at 71 Clinton Fresh Food, a 30-seat restaurant on Manhattan’s Lower East Side. In May of 2007, Dufresne was conferred with an honorary doctorate degree in culinary arts from Johnson & Wales University.