Can You Smell That? 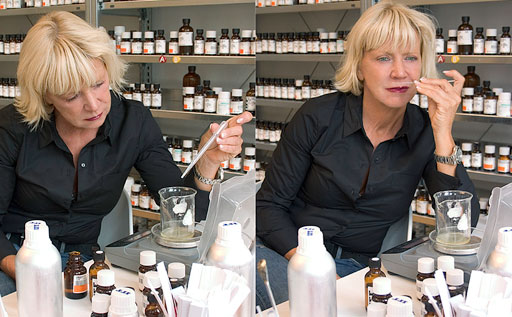 Sissel Tolaas at her lab in Berlin.

The smell hit me like a punch in the teeth. Staggering, I tried to make sense of the pungent, salty, almost sweet odor. It was certainly offensive, but also curiously intriguing. What was this?

The offending waft came from a single molecule found in some of the world’s most-celebrated cheeses. At once slightly nauseous and satisfyingly complex, it’s also responsible for giving beer its heady, hoppy bite. It’s found in less-exalted places, as well. Namely, locker rooms. The same chemical, known as isovaleric acid, is solely responsible for what makes stinky feet smell like, well, stinky feet.

I was at the world headquarters of the International Flavors & Fragrances, a global company that creates a great deal of what we smell and taste. As part of their fragrance production, the firm specializes in “recreating reality.” Using machines that analyze the chemical signatures of volatiles in the air, they can synthesize and bottle an infinite array of naturally occurring smells.

During my encounter with foot cheese at IFF, we were testing the first production runs of “discovery scents cards” that will be handed out to the audience during Scents and Sensibilities: The Invisible Language of Smell, an interdisciplinary exploration of our most complicated and nuanced of senses. The samples were a result of slurries developed by IFF that were flown to a lab in the southern US, and then impregnated onto cellophane stickers.

They weren’t all bad. There were exotic flowers and fruits that smelled like root beer and bubblegum. There was asparagus—spot on and completely surreal in the form of plastic. There was the molecule that only about 60% of the population has the gene to detect; and paradoxically those who are able to smell it either find it wonderful or rancid.

There was bacon (which I’m told polluted the machines at the lab, preventing them from producing perfume samples for at least 24 hours—the most delicious crisis ever). And then there was fresh-cut grass, which instantly brought me back to a lazy childhood summer: my first job mowing neighbors’ lawns; rock fights; building forts.

It turns out scent is powerful stuff; a realization that unfolded in helping prepare this program. The more I learned about the science of olfaction, the more I realized how much information I took for granted in the tens of thousands of breaths I took each day. What most surprised me in my research is the degree to which smells can influence us without our actually knowing it, operating almost like pheromones do in other animals.

Smell is indeed a secret language, a coded vernacular whispering subtle cues, often just below our conscious screen. This makes sense evolutionarily. The brain evolved to make sense of the environment, which is chemically tagged with invaluable life-or-death data. This notion is best summarized in a recent New York magazine article about the Invisible Scent, referencing a landmark book by the naturalist Diane Ackerman, A Natural History of the Senses:

Gazillions of years ago, when primitive ancestors of man were living in the ocean, scent was used to detect an enemy or find a mate. The sense ultimately became so powerful that a heap of tissue on top of the nerve cord evolved into the brain. “Our cerebral hemispheres were originally buds from the olfactory stalks,” Ackerman writes.

“We think because we smelled… Smells detonate softly in our memory like poignant land mines, hidden under the weedy mass of many years and experiences. Hit a tripwire of smell, and memories explode all at once. A complex vision leaps out of the undergrowth.”

Together, we’ll explore this undergrowth. From memory to lust. From organisms that came before us to the complex, airborne communication between plants. From smells that make us want to vomit to those that make us want to have sex. We have a set of diverse, brilliant minds with interesting stories.

Leslie Vosshall is a neuroscientist leading the charge in studying olfaction’s role in the brain and human behavior. Building on her work with Nobel Laureate Richard Axel, she is determining the genetics behind sensitivity of certain smells and how certain compounds may act as sexual pheromones in humans.

One part researcher, one part artist, Sissel Tolaas is a self-described “professional provocateur.” She has traveled the world amassing a “diary of smells” containing over 7,000 scent specimens that she’s been personally harvesting since 1990. She analyzes and synthesizes the scents into compounds in her lab in Berlin to use in her various science-laced art and industry projects, which include: painting the walls of MIT with the sweat of fearful men; training students to use scent as study aides; and breaking down the exact odor profiles of donated coats (“12% Chanel No. 5; 2% Dog Shit, German Shepherd; 5% Soy Sauce”).

A chemical ecologist, Consuelo de Moraes‘ path to smell science started with the secret language of plants. With projects such as discovering the “invisible distress call of nicotine plants” de Moraes has decoded the complicated role of scent in plant communication. She’s currently applying what she’s learned to humans, with a Gates Foundation-funded project to create an “electronic nose” device that can diagnose cases of malaria in rural areas of the developing world.

Avery Gilbert has dedicated his life to understanding the complex nature of smell. Known as a scent psychologist (perhaps the only in the world), Gilbert is author of the book What the Nose Know: The Science of Scent in Everyday Life, and he takes an amusing and decidedly wry approach to untangling the cognitive processes that are central to the sense of smell.

I’m looking forward to the show. I hope you can join us, and breathe it all in. You may be surprised by what you smell. Or don’t smell.

More videos from this series: Scents and Sensibilities