5 Tips On Keeping Your Cool From Kangaroos, Elephants and Koalas 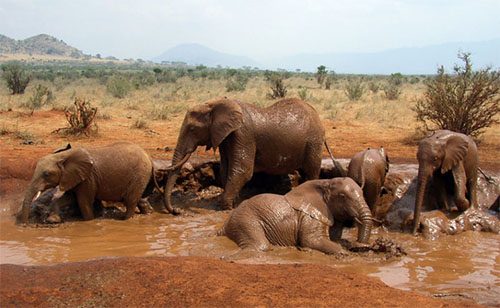 It’s getting to that point (in the Northern Hemisphere, anyway) where access to air conditioning and kegs of iced coffee becomes a prime motivator in our lives. But there are even simpler ways to beat the heat. As we start treading into the dog days of summer, why not look to the dogs—and kangaroos, and elephants—to teach us on how to keep our cool when it’s just too darn hot out?

Kangaroos and cats, like many mammals, will lick their fur to groom themselves. But they lick themselves much more in hot weather, focusing on the forelegs. As the saliva evaporates, it cools the body just as sweat does. There’s some scientific evidence that kangaroos are specially adapted for this cooling behavior—many species have a network of superficial blood vessels just under the skin of the forearm; a high rate of blood flow through these vessels means that the kangaroo loses a lot of heat with every lick.

You can adopt the kangaroo’s strategy by applying a water-soaked cloth or other cold compress to areas of your body where the blood vessels lie closer to the skin, like your wrists, neck, backs of knees, the tops of your feet, and your groin. This assists your body’s natural cooling system by allowing even more heat to be released from those capillaries through the skin.

Koalas keep their own air conditioners very close by. In a study published this month in the journal Biology Reports, scientists tracked nearly 200 koalas in summer and winter, and found that on hot days, the animals tended to splay themselves out more on large, low-lying branches of trees or on the trunks themselves. Thermal images taken of the koalas’ trees showed that the trunks were much cooler than the branches up top.

A tree’s cooling mechanism is a process called transpiration: The water a tree pulls up from the ground through its roots exits through the leaves and keeps the entire tree cool, much like our system of blood flow and sweat help us cool down. The researchers eventually calculated that on a 95-degree day, hugging a tree in the shade could help a 25-pound koala lose up to 68 percent of its extra body heat—a good strategy to remember next time you’re sweating in a park this summer.

Vultures, along with certain stork species, have a rather unique cooling strategy called “urohidrosis.” Lacking the ability to sweat, they defecate on their legs. (Being birds, their feces is an amalgam of solid and liquid waste—instead of getting rid of nitrogen through urea dissolved in urine, they excrete it as uric acid, which is processed into the familiar white goo you find on your lawn furniture, the hood of your car, etc.)

To cool off, turkey vulture-style, without alienating friends and family, try spritzing water on long pants, paying special attention to the ankles and backs of the knees to take advantage of the pulse points mentioned above.

Elephants love a nice dip in the water as much as we do, but they also have another way to keep cool: mudbaths. Pachyderms, along with animals like rhinos and pigs, roll around in mud that not only helps them cool off, but acts as a natural sunscreen. Hippos go a step further and make their own sunscreen: They secrete a pinkish liquid that contains microscopic structures that scatter and absorb UV radiation, much like the ingredients in manmade sunscreens. (Note: Daytime mud and hippo juice application typically requires a very relaxed workplace.)

Hack Your Own A/C Like…Humans

Animals have evolved many ways to keep cool, but there’s a lot to be said for good old fashioned human ingenuity.

• Putting a chilled bowl of ice water in front of a fan or hanging a wet bedsheet in front of an open window create quick “swamp cooler” DIY alternatives to air conditioners. It adds instant “chilly air” at the expense of increasing humidity, so works best in dry climates.

• If you live in a building with multiple stories (or can coordinate with upstairs/downstairs neighbors), you can use the “Chimney Effect” to get cool air flowing in. Cracking the windows on the top floor that get the most sun, and the coolest bottom-story windows, should work. “The upper floor of your house is going to be hotter than the lower floors because hot air rises,” James Drummond, an atmospheric scientist at Canada’s Dalhousie University, told the CBC. “So opening windows at the top and opening the windows at the bottom will create a chimney effect — cool air being sucked in and hot air leaving through the top floor.”

• Finally, long-term, if you have the cash and opportunity to make adjustments to your home, you can encourage productively cool airflow by strategically placing vents, openings and fans to take advantage of both the chimney effect AND the prevailing breezes in your area.