Author Paul Greenberg made a big splash in 2010 with his book Four Fish: The Future of the Last Wild Food, which explored modern fishing and its environmental impacts. He draws the lens even closer, examining the unique stories of U.S. seafood in American Catch: The Fight for Our Local Seafood

. We recently got a chance to chat with Greenberg about his new book:

WSF: So just how much seafood are we importing and exporting?

PG: The U.S. controls more ocean than any country on Earth, but more than 85 percent of our seafood is imported. And a third of what we catch we send abroad. What this amounts to is a downgrading of our seafood system. Generally what we are sending abroad is wild, and what we are importing is farmed.

We’re doing this because it’s much cheaper, but the fish that we’re importing, by and large, don’t have the kind of nutrients that the fish we are exporting do.

WSF: You mentioned in the book how tasteless tilapia is…

PG: Tilapia makes me feel a bit torn. From an aquaculture standpoint, tilapia is a great fish. It grows from egg to adult in nine months; it’s shaped correctly for aquaculture: small beady head, biggish flanks. It’s a fish that can potentially feed the developing world because it does very well in hot countries. But in a country like ours, where we do have enough fish to feed ourselves, we shouldn’t be importing it.

WSF: Have you found that people are still avoiding shrimp and fish from the Gulf of Mexico?

PG: I don’t think there are health risks to eating Gulf seafood at this point, except perhaps for oysters in heavily oiled sediments. Things like shrimp, snapper, are safe to eat.  But I don’t think the environmental effects of the spill have been overblown. The problem is we won’t know for some time what the long-term effects are—we’re still unraveling the consequences of the Exxon Valdez spill in the 90s.

PG:  The New York Harbor School aims to put a billion oysters in the harbor by 2035, which I think is feasible—they already have a million near Brooklyn. It’s just a matter of time.

WSF: Do you think aquaculture and genetic modification will have some unintended side effects on American seafood?

PG: I’m not anti-aquaculture at all, I think when done right, it’s a really good way to acquire protein. But the dark side of it is that it makes wild reproductive systems unnecessary. And the genetically modified fish makes it doubly so.

And unlike terrestrial livestock, where the wild systems that surround them have been frequently eradicated, the wild surroundings into which we might introduce this genetically modified fish are still viable. Why should fish have to bear the brunt of this experiment?

WSF: What local fish would you advise Americans to seek out?

PG: It wouldn’t be a fish at all! I would say the more farmed clams, oysters, mussels we can eat, the better. They create this positive feedback loop: You don’t have to feed them anything, and they clean the water—and they can’t feed us if the water isn’t clean. This interrelatedness of humans and shellfish is one we need to support. If we’re eating wild seafood we should be seeking ones that are not overfished.

WSF: Is there a happy medium we can reach between seafood imports and exports?

But if you had a young scallop that went to China and then we imported those scallops back, I think that’s ridiculous! It shows that the Chinese are more interested in getting food out of their coastal ecosystems, while we seem to just want to put fancy real estate on ours. 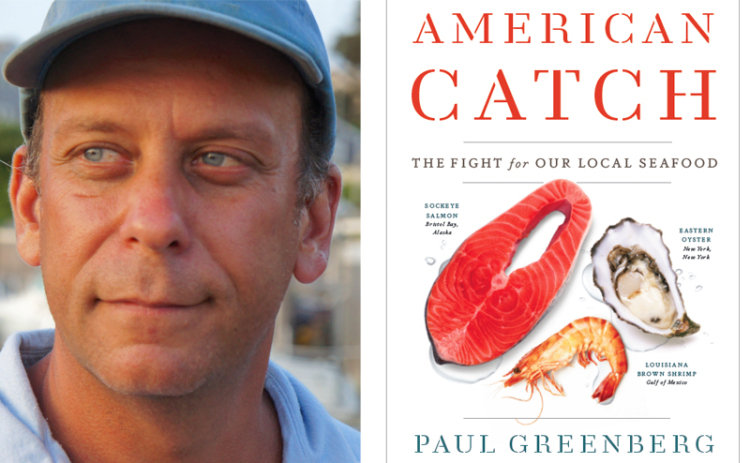 Below, check out an excerpt from American Catch capturing an early litmus test moment for New York City oysters:

Oyster gardening is a phenomenon that had been steadily cropping up throughout the country in the wake of the Clean Water Act, especially in areas where the water became clean enough for oyster gardeners to eat the oysters that they grew. In Washington State’s Olympic peninsula, for example, Taylor Shellfish Farms rings its oyster farms with armies of citizen gardeners as a first line of defense against municipal water pollution. “When they are buying their shellfish seed at our seed sales we tell our gardeners,” Taylor’s Bill Dewey told me, “if they want to eat their oysters, they may want to check and make sure their septic system is working, and they may want to consider picking up after their dog, and think about what types of pesticides they are using on their lawn.”

But in New York the gardeners weren’t planning on eating their oysters and there was no oyster industry with which to collaborate. And so the gardeners made themselves a very simple goal: to merely see whether the oysters would even survive. From the Battery to Harlem, across the Bronx to City Island and Soundview, east to Jamaica Bay, south to Red Hook, and back west to Arthur Kill and Kill Van Kull and on into the bedroom communities of Newark, these cages, tiny sentinels of the lost age of the oyster, were put out in the wastelands of their former kingdom. “We put oysters in fifty different places,” Andy Willner, founder of the organization that would become NY/NJ Baykeeper, told me. “And it was astounding how well they did. They survived everywhere. Well, not everywhere. They died in the Gowanus Canal. But they didn’t die from the pollution. They died because the rats ate them.”