Is This Bomb Big Enough?

Morale is still low at Los Alamos as episode 4 of Manhattan dawns: The implosion group is finding the loss of Sidney Lao’s mathematical expertise to be a handicap, Charlie Isaacs is pulled off the Thin Man project by Manhattan scientific head honcho J. Robert Oppenheimer, and Frank Winter is tormented by insomnia and memories of the horrors he witnessed as a doughboy in World War I. But relief arrives in the form of a surprise guest: physicist Niels Bohr, freshly spirited away from Nazi-occupied Denmark and making his first tour of the heart of the Manhattan Project.

The characters revere Bohr as a god of science, which isn’t too far off from how actual scientists view him. Bohr’s place in the pantheon was assured in 1922 when he was awarded the Nobel Prize in physics “for his services in the investigation of the structure of atoms and of the radiation emanating from them.” One of his most enduring contributions to science is the Bohr model of the hydrogen atom, where electrons reside around the nucleus in orbitals that correspond to various energy states. This view was later complicated by the weirdness of quantum mechanics, but the Bohr model endures as a valuable introduction to atomic physics to this day. Bohr visiting the toiling physicists at Los Alamos is akin to Michael Jordan showing up to a high school’s junior varsity basketball practice. But he wasn’t there to roll up his sleeves and hit the chalkboard.

“By general consensus it’s felt that [Bohr] really didn’t make any significant technical accomplishment in the building of the bomb,” says Robert Norris, a nuclear expert at the Federation of American Scientists. “But he’s kind of an elder statesman. He was there for the morale of the scientists.”

Although Bohr had no direct involvement in the development of fission bombs, to an extent they were his brainchild. It was Bohr who had initially deduced that uranium fission was occurring in the isotope U-235, a find that opened the door to the possibility of an exponential chain reaction that forms the heart of nuclear fission bombs. But Bohr knew that to separate U-235, which accounts for under 1 percent of uranium, would be a gargantuan effort.

“He said it would take a whole country to do it,” Norris says. “Then he gets to the U.S. and sees that, lo and behold, that’s what happened!” 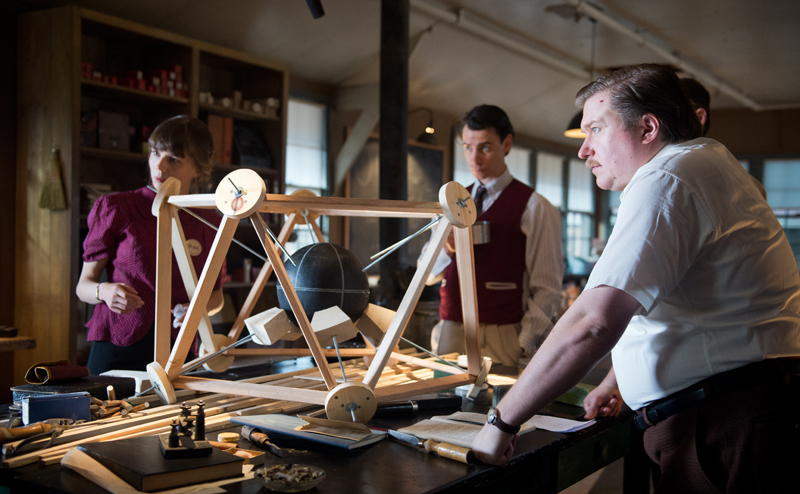 While Bohr is squired around Los Alamos by Isaacs, Winter’s group is still working to prove that their implosion model is superior to the gun-type design known as the Thin Man. This episode, we get a glimpse of a new setup that uses a geodesic-like wooden frame constructed by the crew—modeled after the real-life apparatus, says David Saltzberg, a professor at University of California, Los Angeles, and Manhattan’s physics consultant. “This is part of the frame that would hold all the explosives surrounding an object during an implosion test,” he says.

But getting a spherical shock wave just right is hard to do—if one of the charges is slightly off, the whole thing can blow up instead of blow in. “As you might imagine, it was quite a challenge to detonate each of the charges at the correct time (within a microsecond [one-millionth of a second] or so), so everything had to be constructed and assembled as precisely as possible,” says Jason Baird, a professor of mining and nuclear engineering at the Missouri University of Science & Technology.

Winter’s illicit test appears to have fizzled (as opposed to the first, which just blew up the tube instead of compressing it into a solid cylinder). In explosives, there are any number of factors that can result in a dud: old explosives, contaminated explosives, wear and tear on the initiation system, and much more.

“It is the responsibility of the human blaster in charge to decide what caused the misfire and to render it safe,” says Baird. But obviously you don’t want to go charging in right after a detonation fails—it might blow up in your face, as it does to Winter. “The protocol depends on the type of initiation system being used; depending on the type, the time may vary from an hour to 15 minutes.”

By the end of this episode, the prospect of a (scientific) deus ex machina sweeping in and setting all the ills of Los Alamos to right dims. As in reality, Bohr doesn’t stick around to make a significant contribution to the development of the bomb; he ends up spending much of his time in Washington, D.C., mulling the political future of the bomb.

“He was certainly worried about it,” says Norris. “It’s a burning question: To what degree should scientists be involved in making decisions about the things they discover? Oppenheimer…he basically said, ‘That’s a decision for Washington, but we’ll give our best advice.’ Bohr realizes that it’s a new situation, a new kind of weapon. He interjected himself almost more than any other scientist into the political arena.”

Manhattan, like any historical drama, labors under the handicap of having the ultimate ending already spoiled for the audience. It’s in the character arcs that the suspense lies; Winter, we can assume, will succeed in developing the implosion device that will eventually become Fat Man and wreak destruction on Nagasaki. But now we know Winter’s World War I background and that he has intimate knowledge of how much the “war to end wars” failed to live up to its promise. Is even he convinced that a nuclear blast will be big enough to end not only this war but also all those to come?