“The arc of the moral universe is long, but it bends toward justice.” Martin Luther King Jr. quoted these words of 19th-century abolitionist Theodore Parker at the 1965 voting rights march from Selma, Alabama. Both King and Parker were preachers, but Skeptic magazine founder Michael Shermer argues in his new book The Moral Arc that science is in fact a larger force for good than religion. We got to chat recently with Shermer about science and progress:

(Note: This interview has been lightly edited.)

World Science Festival: When you talk about science driving the “moral arc,” you’re not saying that scientists are the most effective activists; it’s more that science influences society for the better?

Michael Shermer: Yes. I think that we’re all children of the Enlightenment; we’ve all inculcated in our thought processes the idea that people should never be treated as a means to an end but as an end in themselves.

You might ask: What’s science got to do with Dr. King’s march to Selma for voting rights? Where were the scientists on the front lines? But I’m not talking about guys in lab coats running experiments. I’m just talking about the idea of reasoning through an argument, as Dr. King did: Why shouldn’t everyone be given the same rights to vote? Why? Where does that idea come from? It doesn’t come from the Bible. There’s no holy book that talks about universal franchise for people. That was invented by thinkers in the Enlightenment who were scientists. Going forward, there’ll be more rights and liberty for more people, and we’ll recognize it isn’t religion driving it.

WSF: How do we get from a bunch of ‘selfish genes’ to moral beings?

Shermer: As Richard Dawkins points out, the difference between kicking a rock and kicking another organism is that the other organism might kick back. The “selfish gene” model of morality doesn’t mean you’ll always be selfish, because other creatures are not going to like that. You have to be cooperative at least some of the time, and try to signal others that you are that way, so that when times are tough for you, they’ll help you and vice-versa. But it’s not enough to pretend that you’re a good person, a moral person, you have to actually believe it by doing it.

The whole point of a civil society is that we’re pushing our moral sphere outward from our immediate kin and kind to people we don’t know. We get there by repeating it and living it and believing it, and that has driven the moral arc. It’s taken centuries, and there’s been lots of little steps backward, but overall it’s improving.

WSF: How does this widening of the sphere tie into science?

Shermer: Well, with increasing rates of literacy and production. These things help because they diffuse information about other people. Now of course that can work in the other way; we can better define people we don’t like. But overall, there’s a slight advantage on the good side of the scale for travel, the Internet—reading, too. I cite some evidence in the book that people who read a lot of high literature score higher on theory of mind, or “mind reading.” They can better anticipate what someone is thinking, they’re better at reading emotion on other faces more accurately. Overall we find that exposing people to literature, culture, science—that’s good for moral development.

WSF: What about instances where scientists have behaved badly—like the Tuskegee experiment?

Shermer: I wouldn’t even put things like that down as science screwing up.

In the case of, say, eugenics as employed by the Nazis, that wasn’t science, that was pseudoscience. First of all, the Nazi regime was not a scientific regime; it was really a throwback to Romanticism. It was a rejection of Enlightenment secular values and science and reason. It said that blood and soil and race are the dominant things, and our race is the dominant one, and they used and abused science to that end. So you can’t lay the blame on science. I think science is neutral in that regard and can be misused, but the application of scientific process to solving social problems gives you better governments.

WSF: Is science naturally wedded to any particular economic or governing system?

Shermer: No, but we can use science to see which systems work best. And you can see that liberal democracies and fairly open trade are measurably good.

In a way, having different countries with different political systems, like North Korea and South Korea, is like a controlled experiment: This one’s gonna try democracy, this one’s gonna try autocracy, and let’s see which one flourishes the most. Boom—you can see on a map: North Korea is dark and South Korea is lit up; South Koreans are three inches taller than North Koreans, on average. It’s measurable, and the differences are huge. I would argue that we know democracies are better than autocracies and you can measure that in any number of ways.

WSF: Will the moral arc keep bending towards justice in the near future?

Shermer: One thing I talk about in The Moral Arc is a so-called “moral Flynn Effect.” The Flynn Effect is that IQ scores have been going up three points every 10 years for almost a century. But not on all the test items—on the abstract reasoning portions of the IQ tests. James Flynn, the psychologist who discovered it, he attributes it to the fact that society at large is being lifted, by dint of living in an industrial, information-rich society where you have to engage in more abstract reasoning for most jobs.

Flynn talks about a thought experiment he did with his father: “Imagine you woke up tomorrow and your skin were black, would that mean you were a lesser person?” And he said, “Whoever heard of skin changing color?” The thought experiment—we’re so accustomed to doing that, that we don’t even notice it. But that’s pretty new.

WSF: It’s almost like we’re driving our own moral evolution…

Shermer: Yes, it’s definitely an autocatalytic system. It’s not impossible that we could go backwards, but it’s unlikely: Can you imagine slavery being legalized anywhere again? 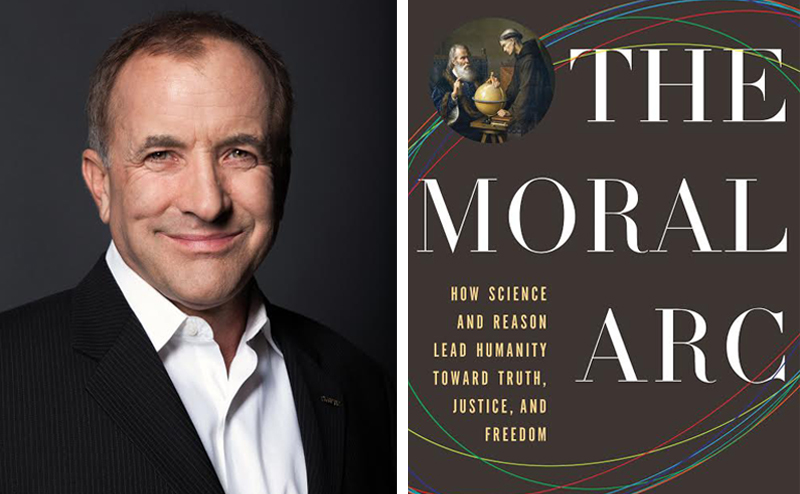 In addition to the role of science driving justice, The Moral Arc deals with logical ways to examine morality, as shown in this excerpt:

Thinking abstractly is not the only cognitive tool of the scientist that we can apply to moral reasoning. Thinking about concepts on both a continuous scale and as categorical entities illuminates—and sometimes eliminates—a number of moral problems. Good and evil are descriptive terms or behaviors of moral actors that can be assessed along a continuum. Take altruism and selfishness: Like all behaviors, there is a broad range of expression of both types of behavior. Instead of categorizing someone as either altruistic or selfish in a 1 or 0 binary logic system, we might think of this person as 0.2 altruistic and 0.8 nonaltruistic (or selfish), or .6 cooperative and 0.4 noncooperative (or competitive).

Most moral problems are better conceived as continuous rather than as categorical. The categorization of the world into cleanly cleaved boxes is a useful cognitive tool for some tasks, but it doesn’t always serve us well in understanding social and moral problems. Does democracy decrease the probability of war? If you categorize nations into simple binary boxes of democracy or nondemocracy (1 or 0), you can find lots of exceptions to the democratic peace theory. But if you scale rank countries by degrees of democracy (on a 1-10 scale), and you also scale wars from minor conflicts to world wars, you find a significant negative correlation between the degree of democracy and the probability of fighting.