Understanding Fukushima, Part 4: The Risks and Benefits of Nuclear Energy

This is the fourth post in a four-part series on the Fukushima disaster and the science behind what happened. Read Part 1: How a Nuclear Plant Works here, Part 2: The Earthquake and The Tsunami—The Perfect Storm here, and Part 3: Meltdown & Clean Up here.

The Risk for Us: What Does Radiation Exposure Actually Do?

Whether it happened in October 2013 as alleged or not, it is clear that radioactive water has been dumped into the Pacific Ocean. In late 2016, seaborne radiation from Fukushima was detected in U.S. waters for the first time, off the coast of Oregon. But as of 2018, radiation levels in West Coast waters were well below federal standards set by the Environmental Protection Agency—safe enough to frequently swim in.

The long journey these radioactive particles took through the Pacific is shedding new light on how ocean currents circulate around the world, and helps explain how the radiation diluted so quickly.

As for sea life, it is expected that local fish and plant life in Japanese waters have absorbed the brunt of the radiation, and could pose a threat if consumed, but for those fish that are out farther, the potential for contamination should dissipate. There are caveats, of course. For one, strontium is a bone-seeking isotope, and it may be more persistent than other radioactive elements. 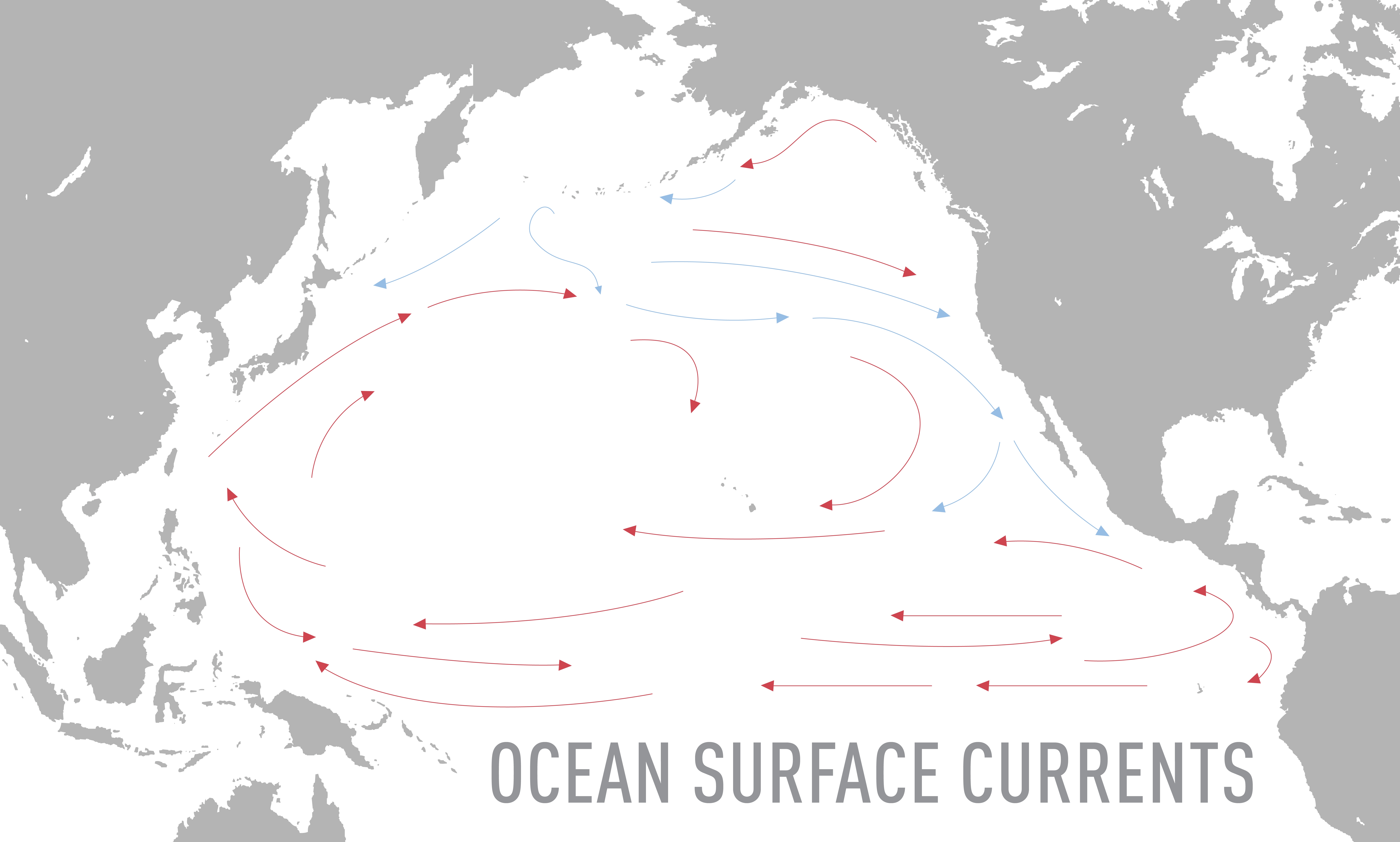 Pacific Ocean currents circulate water between coasts. Estimates suggest contaminated water takes around 3-5 years to reach the US from Japan.

As far as we know, there is no safe level of exposure to radiation. Regulatory limits are arbitrary—merely a measure of the risk governing bodies are willing to accept. At low-level exposure, the main concern is developing cancer, and less exposure equates to reduced risk of developing cancer. But since the cancer doesn’t show up immediately, and the global incidence of potentially deadly radiation exposure is thankfully small, data points are limited. Most of our understanding of radiation exposure in large populations comes from studies of survivors of the Hiroshima and Nagasaki bombings, and these studies are imprecise at best. Those who lived miles away, in the countryside, received a lower dose of radiation, and their instances of cancer have been tracked, but it’s already been demonstrated that country-dwellers have different cancer rates than city-dwellers, reducing the predictive value of such data.

There are a number of factors that can lead to cancer, of course, and radiation is a fairly weak carcinogen. A person living in the U.S. who hasn’t been exposed to radiation has roughly a 40% chance of developing cancer in their lifetime (44% for men, 38% for women). “So radiation is going to increase that by a pretty small amount, a low dose of radiation, shall we say [to] 40.01%,” says Dr. Brenner. Cigarette smoking, for example, has a much higher impact on incidences of cancer, and small changes in smoking behaviors easily dominate any effect of radiation. Interestingly, this affects the Hiroshima and Nagasaki studies, because cigarettes were easier to obtain during WWII than after.

Because the effects of low-level exposure are not readily evident, and difficult to predict from incomplete data, it will take scientists a long time to determine the full impact of this event.

What Will Change? The Risk/Reward Proposition of Harnessing Nuclear Energy

A number of structural engineering considerations have come out of the Fukushima disaster, and design refinements promise a third generation of nuclear reactors closer to “risk free.” For example, when all power shuts down, the cores will automatically flood with water, and presumably, given the lessons of Fukushima, generators will be placed on high floors. But it’s unlikely this inherently volatile and dangerous process can ever be completely risk-free. Is it worth the effort?

Like coal, uranium is a nonrenewable resource, but there is a lot of it in nature, and unlike other fuels, it takes very little uranium to produce a good deal of energy. A pound of highly enriched uranium as used to power a nuclear submarine is equal to about a million gallons of gasoline. For a long time, it was cheaper to produce nuclear energy than fossil fuels, and nuclear is generally understood to have a much smaller carbon footprint. Now that natural gas has come online as a lower-cost alternative at scale, the cost-effectiveness of nuclear energy has waned relative to the apparent risk. But because a small amount of uranium creates a large amount of energy, it may turn out that nuclear energy prices would be more stable than energy from fossil fuel, whose extraction requires ever-deeper levels of societal disruption (e.g., fracking).

There is a lot to consider when assessing the risk and benefits of using nuclear energy, and the debate over how (and if) we include nuclear energy in our energy mix will likely continue for decades to come, as technologies advance and our global energy needs grow.