This is the third post in a four-part series on the Fukushima disaster and the science behind what happened. Read Part 1: How a Nuclear Plant Works here and Part 2: The Earthquake and The Tsunami—The Perfect Storm here. 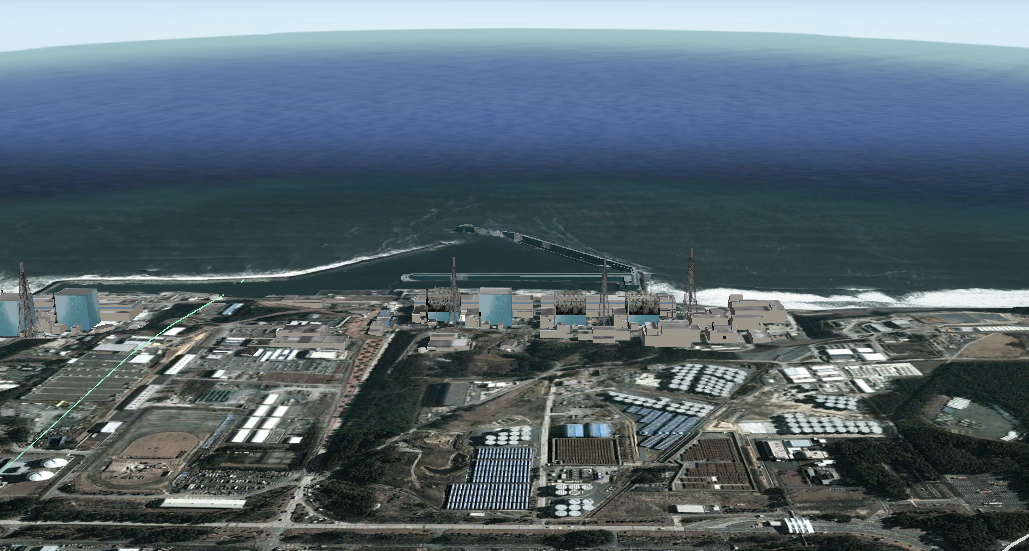 Meltdown: What Happened at Fukushima Daiichi

The Fukushima Daiichi power station was operating three of its six reactors when the earthquake struck, and the plant initiated an automatic shutdown: Control rods, which absorb the free neutrons that would normally continue the fission chain reaction, were thrust upward into Units 1, 2, and 3. But the radioactive byproducts continued to generate a great deal of heat. A cooling system called an isolation condenser (IC) pumped water through the reactors to cool the cores, but the operators noticed that the IC was cooling Unit 1’s core too quickly. As metal contracts in cold temperatures, they were concerned this could have stressed the steel walls of the containment vessel, so they temporarily shut the IC down for that unit. And it was while the cooling IC was off, roughly forty-five minutes after the earthquake, that the first tsunami waves hit.

Water rushed over seawalls, smashed into the seawater pumps used in heat-removal systems, and submerged and disabled the plant’s power panels. Fukushima had been running on generators following the quake, and all but one were made unusable in the tsunami. The result was effectively a full station blackout. Without power, the operators had no way to restart the IC cooling system for Unit 1. This meant that the hot fuel rods were boiling water into steam, and the temperature and pressure in the reactor vessel, which housed the fuel rod assembly, were rising uncontrollably. 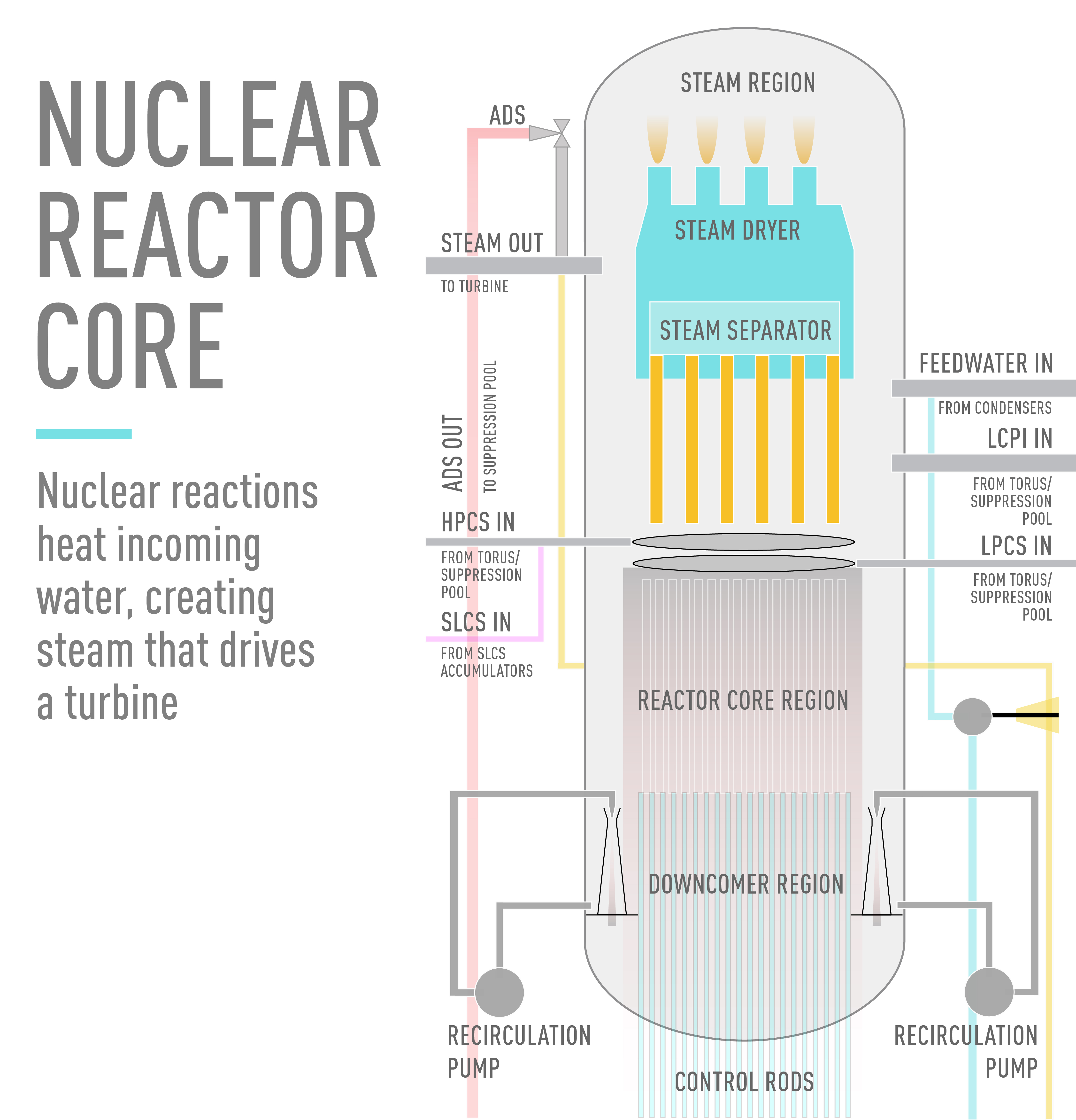 When the temperature inside the reactor vessel exceeded 1300° Celsius, the zirconium coating of the fuel rods began to react with the steam inside the vessel, producing a volatile hydrogen gas. The uranium began to melt. Radiation levels steadily rose around the plant. In later simulations, it was determined that nearly all the reactor fuel in Unit 1 melted through the steel reactor vessel and made a serious dent in the primary containment vessel surrounding it.

As temperatures climbed, the plant owners, Tokyo Electric Power Company (TEPCO), ordered that Unit 1 be vented—this would send radioactive gases into the countryside air, but would relieve pressure in the reactor. What the team at Fukushima did not yet realize was that gases were already building up in the containment vessel and pushing through the weak spots, the gaskets and seams. Freed from the containment vessel, this hydrogen, which is lighter than air but highly flammable (remember the Hindenburg?) rose to the ceiling. Just a little over a 24 hours after the earthquake struck, a spark occurred in Unit 1 and the top of the reactor building exploded.

The blast turned the whole area around Fukushima into a radioactive hot zone, and made containing Units 2 and 3 significantly more difficult. Two days later, Unit 3 followed Unit 1’s path. The following day, Unit 4 exploded, probably due to gas from Unit 3 (as its core was discovered to have remained intact).

What Does a Nuclear Cleanup Entail?

It will take more than 30 years to fully decommission the Fukushima power plant, and the cleanup efforts for the entire affected area have been confused and controversial from the get-go. The problem is there’s no sure way to decontaminate a region—other than waiting, that is. The time something stays dangerously radioactive depends on the half-life of the radioactive elements within it—the time it takes for radioactivity to reach half its original level. Cesium, just one of the radioactive elements produced in the fission of uranium, has a half-life of about 30 years.

In terms of mitigating any further disaster, efforts have so far focused on two very difficult problems: what to do with the spent fuel rods still housed at Fukushima, and what to do with the massive amount of radioactive water created in the failed cooling efforts.

As Dr. Brenner told us, spent fuel rods are the “eight hundred pound gorilla in the corner,” because there’s no good way to get rid of them—they just keep piling up. During the nuclear fuel cycle, uranium-235 is consumed, lowering its percentage relative to uranium-238. When the percentage gets down to 1.5%, it’s unusable for generating power, but still quite radioactive.

While waiting the decades it takes for its radioactivity to decay, spent fuel is stored in pools of water to remain cool. At Fukushima, those pools are on the upper floors of the buildings. There is concern that the buildings are now structurally unstable, and so TEPCO has begun the multi-year process of removing the rods. This removal began in November 2013, using, for safety and precision, a remote-controlled crane mounted outside Unit 4. The crane removes the rods one-by-one, keeping them underwater to keep them cool and because water shields radiation, and puts them in a cask that can carry up to 22 assemblies. Another crane lifts the cask onto a trailer, which carries the rods to an above-ground pool, considered a much safer storage space. With some 3,106 fuel-rod assemblies at Fukushima, each holding between 60 and 80 rods, there are in the neighborhood of 200,000 rods to be removed, and cleanup is still ongoing.

There have been swirling concerns about the fuel rods—what will happen if one breaks, if there’s a possibility of an explosion. And the truth is, TEPCO doesn’t know if the rods were damaged during the earthquake and ensuing events. Because seawater was used to cool some of the rods, they may be corroded; the crane is new and might malfunction and drop or damage a rod in removal. It’s important to note that none of these eventualities would lead to further explosion or exposure—they would simply make the mess messier. “It wouldn’t be catastrophic, but it would be very very awkward,” explained Dr. Brenner, because if a rod breaks there’s more to pick up, in a less controlled setting, and the process still must be done remotely.

Beyond the rods themselves, there’s a growing concern about the amount of radioactive wastewater at Fukushima. All nuclear power plants produce radioactive water, a necessary output of the cooling system. Michael Corradini, nuclear engineer and professor at University of Wisconsin, Madison, explains, “You can only use one-third of the heat to make all the electricity—two-thirds have to be rejected, [and] you can only reject the heat to water or air.”

In a functional scenario, this water moves in a closed loop—fission heats the water to make steam, the steam drives the turbine, the turbine makes electricity as the steam is condensed back to water, and the process starts again. Both the steam and the water are highly radioactive—particles of the core get suspended in them—but it’s not a concern, as long as the cycle remains contained and intact. When there’s a breach, however, this radioactive wastewater is released.

The water issues at Fukushima are compounded, however, because groundwater has been pouring into the plant’s ravaged reactor buildings, where it becomes radioactive, yet must be pumped out to keep from swamping the cooling system. To contain the water, TEPCO has been relying on storage tanks. Each tank holds the equivalent of 112 Olympic-sized pools, and they must keep being created as the groundwater flood continues. Initially, TEPCO planned to chop down a small forest to make room for hundreds more tanks. It gets worse: in October 2013, news broke that toxic water had overflown the tanks and may have spilled into the Pacific Ocean through a drainage ditch.

Can radioactive water be filtered? Yes, but it’s not an easy task. The water at Fukushima is contaminated with several different radioactive elements, including strontium, cesium, and iodine, and the particles are very small. While efforts have been made to filter the water, it has yet to work. And, as Dr. Brenner pointed out, it wouldn’t actually solve the problem—there would still be radioactivity, it would just be separate from the water. That radioactivity would need to be stored somewhere, like the spent fuel.

When all this is done, if the melted cores at Fukushima remain dangerous enough, they will likely be entombed. “Surround it with concrete and leave it for several hundred years,” advises Dr. Brenner at the Center for Radiological Research. The project will probably require maintenance over that long time span; at the site of the world’s last nuclear disaster, the 1986 explosion at Chernobyl, officials are still working to seal the plant effectively, after the metal and concrete sarcophagus began to fragment.

Read Part 4: The Risks and Benefits of Nuclear Energy here. 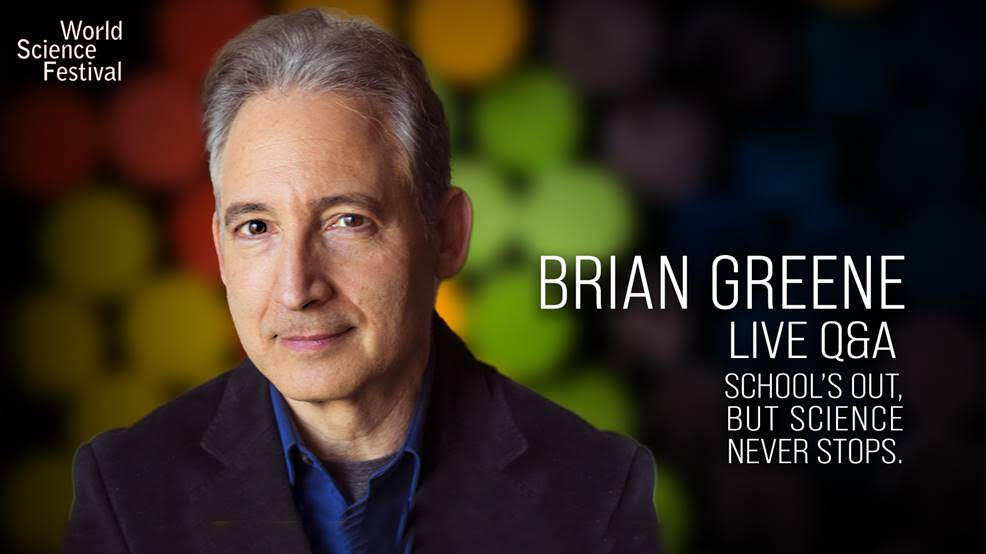