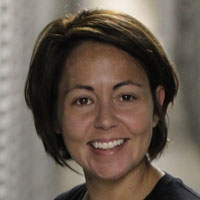 Beth Shapiro is an evolutionary biologist who specializes in the genetics of ice age animals and plants. A pioneer in the young field called “ancient DNA,” Beth travels extensively in the Arctic regions of Alaska, Siberia and Canada collecting bones and other remains of long-dead creatures including mammoths, giant bears, and extinct camels and horses. Using DNA sequences extracted from these remains, she hopes to better understand how the distribution and abundance of species changed in response to major climate changes in the past, and why some species go extinct while others persist. The results could be used to help develop strategies for the conservation of species that are under threat from climate change today.

Professor of Biology at Penn State University and a research associate of the Denver Museum of Natural History, Shapiro has been widely honored for her research. She was recently named a Searle Scholar, Packard Fellow, and a National Geographic Emerging Explorer. In 2009, she received a MacArthur “genius” award.