The 2015 World Science Festival has officially arrived, bringing opportunities to spark interest in science all across the five boroughs of New York City.

“We’re taking the top scientists in the world, and bringing them here to interact with people, for people to meet them and to listen to them. And they’re really great at communicating science,” Festival co-founder and CEO Tracy Day told NY1.

At the NASA Orbit Pavilion, engineers from the Jet Propulsion Laboratory and Studio KCA erected a giant chrome seashell to house the sonic art of Shane Myrbeck. Step inside this shell, though, and you won’t hear the ocean; you’ll experience the movements of satellites translated into a haunting soundscape. The pavilion, which also plays host to hands-on activities and talks with NASA scientists about everything from ice to augmented reality, will be up throughout the whole Festival, so no worries if you missed out today.

The pavilion’s exhibits “changed the way I looked at Earth,” said Giovani, a student at P.S. 63. “I thought nothing was going on, but I realized glaciers were melting and causing things like tsunamis.”

With a Nod to Beyoncé and #girlswithtoys: Who Run the Lab? 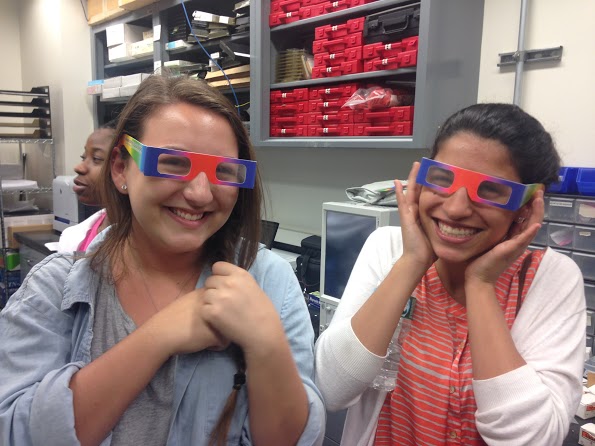 For young women who aspire to scientific glory, it helps to have some role models to show the way. At the event Who Run the Lab?, high school students from across New York City got to experience a myriad of scientific work, touring laboratories run by women scientists at Columbia University, New York University, and the City College of New York. 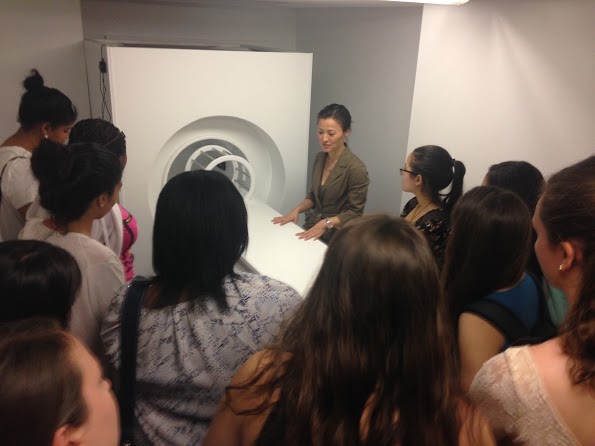 The girls who toured the laboratory of Columbia neuroscientist Nim Tottenham got to see a mock MRI machine that Tottenham uses to prep her child research participants. Her work involves scanning children’s brains in response to various stimuli.

And in Columbia bioengineer Elizabeth Hillman‘s lab, students got to see Hillman’s hand-built microscopes, which are made to specific parameters such that they can manipulate light to see changes in blood flow in living organisms. 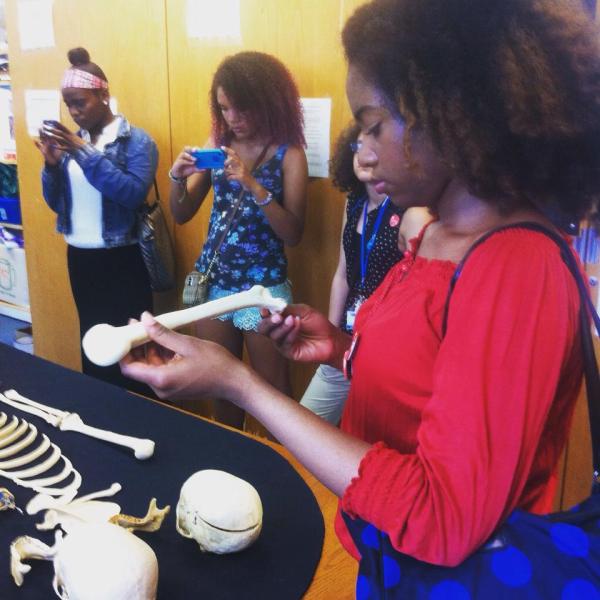 At NYU, anthropologist Shara Bailey showed students an assortment of human bones (really, casts of bones) and talked about the incredible amount of information that can be gleaned from them. Small grooves left by blood vessels can show you that a fragment of skull was located on the back right of the head; the distinctive facets on another thick fragment mark it as part of the eye socket.

Forensic anthropological expertise is often called upon to help identify human remains—whether it’s an individual who died hundreds of thousands of years ago, or a murder victim unearthed last week. Bones can help zero in on an identity in a variety of ways. Sex shows up in the pelvis and skull; age can be ascertained from the length and development of various bones, even to the point that scientists can tell a newborn from a miscarried baby. Then there’s another, more contentious category: race.

“Anthropologists don’t like to use the word ‘race,’ because there’s variation of traits all over, and one type just grades into another,” Bailey said. But law enforcement still looks for simpler racial categories, so forensic anthropologists also measure features of the skull to help identify remains as African, European, Asian, or some mixture of the three.

Seeing Bailey’s lab “definitely changed my perspective on anthropology,” said Yuan Zhao, a senior at the Collegiate Institute for Math and Science in the Bronx. “I thought it was just about history, but it turns out there’s a lot more to it.”

And the first of seven Big Ideas events, Spark of Genius? Awakening a Better Brain saw a spirited conversation on the virtues and dangers of tDCS or transcranial direct stimulation. This practice, in which electrodes are arranged on the surface of the skin, is being explored as both a treatment for various mental ills and a way to enhance certain cognitive functions, but it is not without its detractors. While preliminary work on tDCS highlighted by neuroscientist Michael Weisend shows that the procedure can produce impressive, short-term gains in concentration and other abilities, bioethicist Nita Farahany wondered how we would deal with the implications of this kind of performance enhancement. For instance, would people be comfortable going to a surgeon who used tDCS for a quick mental boost to get through their board exams? And should parents be allowed to apply tDCS to their children to get them into top schools, when we don’t know what the long-term effects on the structure and function of the brain are? (Watch the full program here.)

If all of that sounded amazing, just wait—there are still four more days of Festival to come.